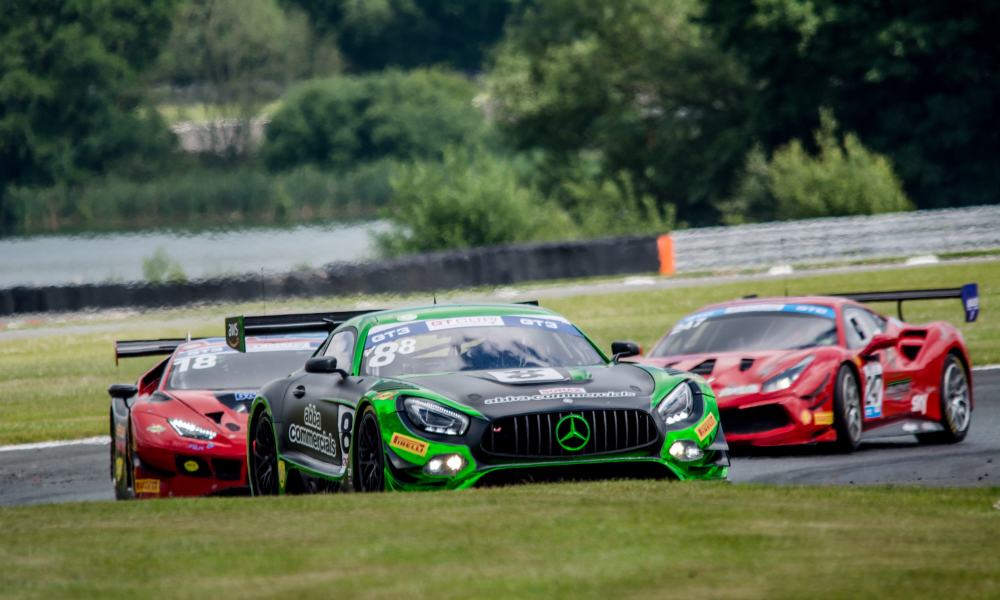 WPI Motorsport and Team Abba Racing took a win apiece as the GT Cup Championship made it's long-awaited return to Oulton Park after a two-year absence.

The GT3 teams did battle throughout the weekend, with WPI's Michael Igoe and Phil Keen prevailing in a wet-to-drying opening encounter before Richard and Sam Neary struck back under blue Cheshire skies in their Mercedes in the second 40-minute race. After a break-through victory in the last round at Snetterton, the SB Race Engineering Brabham BT62 of Paul Bailey and Ross Wylie took both GTO victories - in addition to third overall in Race Two.

There was also double joy for Lucky Khera, who returned to the familiar surroundings of his Simon Green Motorsport-prepared Ferrari 488 Challenge to sweep the GTC category. GTB triumphs were shared between the Porsches of Team HARD Racing and Valluga, while GTA was split between Scott Sport and Orange Racing.

Orange Racing also tasted victory in GTH, Josh Jackson taking the second win of the day after Balfe Motorsport topped the class in Race One.

Heavy rain peppered qualifying but that didn't deter Sam Neary, as he powered the Team Abba Mercedes to the top of the timing sheets - more than eight-tenths clear of WPI's Igoe, who qualified alongside in his Lamborghini Huracan.

Lucky Khera's return to the GTC ranks netted him third overall and class pole in his Ferrari 488, while Sam Randon qualified alongside him as he took GTB honours in the Team HARD Porsche.

The Raw Motorsport Radical mastered the conditions to take GTO pole, while makehappenracing and Paddock Motorsport did the same in GTA and GTH respectively.

A wet-to-drying track ensured an enthralling race as teams managed their wets in the opening stint, and then had to juggle the tricky decision on whether to stick on wets or switch to slicks. In the opening stint, Richard Neary didn't put a foot wrong in the Abba Mercedes and gradually opened an advantage over Michael Igoe.

Coming into the stops, an issue with the Mercedes' air jacks meant the team had to commit to wet tyres until the end, whereas WPI took the decision to fit slicks for Phil Keen. That proved the difference, as the Lamborghini factory driver quickly slashed down Sam Neary's advantage and was soon on his rear. When the winning move came, it was a thing of beauty. With just under ten minutes remaining, Keen exploited the grip of the outside line round Shell Oils Corner to slingshot round the outside of Neary and into the lead.

Balfe Motorsport triumphed in a GTH battle which was anyone's game until the very closing stages. Involved for most of the race in a four-way battle with the Enduro Motorsport Mercedes, Paddock Motorsport McLaren, and the Feathers Motorsport Aston Martin, rapid laps on slicks in the closing stages from Callum Macleod ensured victory.

Scott Sport came out top in GTA, while Paul Bailey and Ross Wylie took their second GTO win of the season in their glorious Brabham BT62 in. GTC was a comfortable win for Lucky Khera on his return to the Group. The Ferrari racer made the most of the straight-line speed of his prancing horse, finishing fourth overall just behind the Tecserve/Triple M Nissan of Grahame Tilley and Sennan Fielding. Rounding out the winners was the Richard Marsh & Sam Randon Porsche, the Team HARD pairing having a clear run to the GTB honours.

Compared to Saturday morning's wet encounter, the final race was held under sunny skies but the battle for the victory was just as hard-fought. Starting on the outside of the front-row, Richard Neary made a great start to pass pole-sitter Lucky Khera at Cascades but quickly came under pressure from Michael Igoe who had a great first lap to rocket up from fifth. The pair were almost tied together as they diced through traffic, the lead never exceeding much more than one second until the mid-race pitstop.

Success seconds for winning Race One meant Phil Keen came out just under five seconds behind Sam Neary's Mercedes. Keen tried to cut down the gap, but a drive-through penalty for pit lane speeding ended his charge - securing victory for Team Abba Racing.

Nick Phelps took his third GTB win of the season in Valluga-prepared Porsche 991 GT3 Cup, overcoming Race One crash damage to cruise to a comfortable class win. The SB Race Engineering Brabham BT62 took a brace of GTO victories - and third in the overall classification - after a blistering stint from Ross Wylie catching and passing the Triple M/Tecserve Nissan in the final ten minutes.

It was double-success for Orange Racing as the team tasted victory in GTH with Josh Jackson and GTA with Simon Orange. Lucky Khera secured a GTC clean-sweep in his Simon Green Motorsport Ferrari 488, winning ahead of Topcats Racing's Warren Gilbert and Jensen Lunn.

The next GT Cup Championship meeting will take place at Silverstone over the weekend of 14/15 August 2021.

“It’s a bit of the nature of the GTH class for it to be so close from what I can tell, certainly in Pro-Am it’s the most competitive GT4 series in the country at the minute and my stint was all action. At one point it looked like it was unravelling for us a little bit because we had a ten-second success penalty coming from third in the last race at Snetterton, but the boys won us that race.

“They did a fantastic pitstop with the tyre change just over the minimum pitstop time, whereas I think others maybe didn’t do quite so good a job which gave me track position. Once I was out there on slicks I pushed like crazy to get the lead and then on I just drove round to bring it home.

“It wasn’t an easy call to go onto slicks, but clearly it was the right call. It paid off for this time, but it doesn’t take much for that call to go the other way. We’ve got a very good team in Balfe, they’re very experienced guys and to an extent that’s what you’re getting when you sign for a time of this level.”

“It was a good race [Race One], Michael drove well and the guys made the right call on the pitstop to put slicks on. Sam [Neary] unfortunately had an air jack failure so they couldn’t change to slicks, so it made my life a bit easier!

“He was on wets, so it made the pass quite easy really. He wouldn’t have had a lot of grip and he was struggling, so it was just a case of biding my time and finding a safe place to overtake him.

“The weather was miserable this morning, it didn’t rain for a while before the first race and these cars dry the circuit quite quickly so there was a dry-enough line to make the decision to go to slicks and actually there was only one corner that was still wet, so it was the right call.”

“I enjoyed the last race. The first race was very tricky for us in the wet conditions, same for everyone of course, but first time really using the car in anger in the wet so you had a few little challenges to face. But we got through it, it was a case of survival.

“Then when I saw the dry conditions for Race Two we knew we had a good chance to give it a good push and see what we could do. I dare say a few more rounds getting on top of the car and we can hopefully challenge for overall wins.

“It’s one of those cars that’s really quite rewarding, you can push it in anger and it is confidence-inspiring. I would have liked to have done a longer stint in the car, of course I would, but Paul did a great job handing over the car where he did and the guys at SB Race Engineering did a great job preparing the car for us.

“It is still a relatively new car and we’re starting to get on top of the reliability touch-wood, and the guys at SB are doing a great job preparing it for us. Hopefully there’s more to come and Silverstone, fingers crossed, should suit us on paper.”

"Race Two was a cracking win, obviously race one wasn’t so good! The team did a fantastic job getting the car back together, the rear spoiler was actually held on with three cable ties for that race! New radiator in too.

“We weren’t sure whether it was going to be OK or not because we didn’t have time to do everything, and the plan was to do the first lap, see how the car feels and if it feels good go on. I thought it felt OK, I was going to press on, and the car got quicker and quicker. By the second-half of the race I set my fastest lap of the weekend so I was really, really pleased.

“I was in the wrong head-space [before Race Two], I’d actually packed up to go home and they called and said ‘you need to come back, because we’re going to get the car ready’ and I said we’re not going to get that ready, but they said ‘no, no it’s ready!’ So it’s been good, the engine is actually misplaced by two inches, it’s actually two inches over to the left of the car such is the engine frame is bent but we said ‘let’s race it’ and I’m glad we did.”

“I’m comfortable in that car, I know it quite well and I can settle back into it quite quickly! I think the rain is a good leveller, I’m faster in a straight line and they’ve got more aero in the dry - I was praying it would rain all day!

“Race Two was good, it becomes difficult when the segregation happens and I’m on my own - you start sort of day-dreaming!”