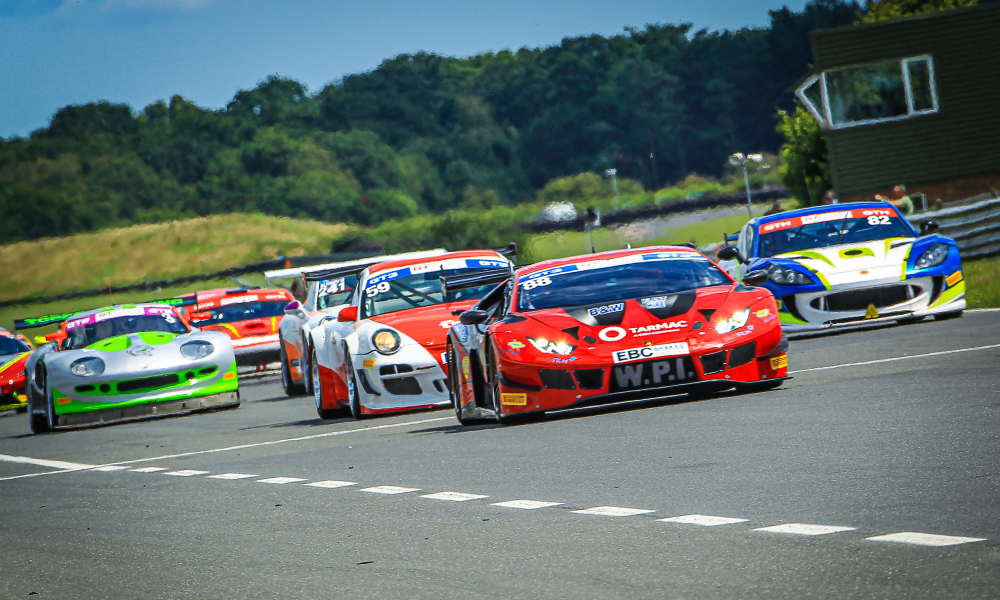 WPI and Scott Sport do doubles at Snetterton

Michael Igoe and WPI Motorsport took their fine form into the second day of GT Cup 2020 action at Snetterton by claiming another brace of victories, matched all the way by GTC winners Scott Sport Racing.

The 15-minute qualfying session was greeted with sunny skies and warmer track temparatures than Saturday, but the result still went the way of Michael Igoe with a time of 1m50.251s to double his pole position count of the weekend.

Tailing him was Dhillon who found further pace in his Scott Sport Racing Ferrari 488 Challenge, while the GTB class welcomed back Topcats Racing in fine style as Warren Gilbert pumped in a lap good enough to place the fabled Marcos Mantis fifth on the grid overall and best in class. GTH pole went to yesterday’s enduro winner James Guess, while fellow Ginetta G55 drivers Simon Orange and Joshua Jackson took the GTA pole for Team HARD.

Igoe added win number three of the weekend with a lights-to-flag sprint race performance. The GT3 car gapped the winning GTC Ferrari of Dhillon who in turn did his own championship chances no harm at all by clinching a third class win himself.

Dhillon held Will Goff’s Porsche 911 adrift by just 0.300s at the flag, Lucky Khera’s Porsche next up ahead of the rapid Gilbert who gave the Marcos its first win of the season in the GTB class in fifth overall.

Behind him in a strong sixth on the road was the GTH-winning Ginetta G55 of Wilkins, grabbing his second win of the weekend ahead of Guess and Steve Ruston’s title-defending McLaren. Another Ginetta headed GTA thanks to Orange, beating the sister Team HARD G55 of Russell Lindsay and Patrick Collins.

Factory Lamborghini driver Dennis Lind got his turn to share the victory spoils as he joined Igoe in the lead Lamborghini for the endurance race. Igoe stretched his legs initially, before Lind proceeded to set the fastest lap of the race to negate the damage of pit stop penalty seconds and confirm a fourth win overall and in GT3.

The GTC class was a nervy battle to the wire. Khera took advantage of early leader Dhillion to grab the advantage in his Porsche, but in the final five minutes the Ferrari of Scott snatched the class lead and second overall from his rival in the infield section of the 300 circuit to ensure four wins for the team in class.

Scott Sport also took GTH honours with Wilkins, who fought off a gaggle of cars early on headed by GTB runner Jensen Lunn before the Marcos retired. GTA also went the way of a Ginetta G55 thanks to Ollie Brown and Callum Jenkins, who finished a fine fourth overall to stop their Team HARD team-mates bagging a double.

GTB spoils went to Team HARD also, this time in their Porsche thanks largely to a rapid opening stint from yesterday’s star, Sam Randon. The team’s #78 Porsche therefore takes the early championship lead as its reward with Ben Clayden joining Randon in Norfolk.

“It’s good to be back out in the car, and to be just back racing again after this whole period of uncertainty. I’m very happy with the weekend. Michael did super, the car and team were great and we got to show ourselves today. Being on the track is not a problem, but for me it’s the ravelling that has been more difficult. I have I think 16 race weekends now so will be busy! What is super rewarding is seeing the marshals waving at you on the cool-down lap again. That is an amazing feeling.”

“It was close as obviously everything was neutralised a bit by the safety car. That put us back in it and gae us a chance to go and chase something against Lucky. It’s been a good weekend for the team as a whole, and for the first event for many of us of the year it’s gone very well. John drove really well all weekend, and of course I’m happy for Craig and how well he has done in the Ginetta.”

“It’s been a very good weekend for us all and in particular, Scott Sport and our truckie have given us an awesome car. It’s been great just coming back to GT Cup. I was in the inagural event and did a couple along the way, but now the format is different it gives you a great mix of cars. In the early stages, it makes it a tough challenge! The young lads have been blinding today if I’m honest, and the guys were good to tell me who to battle with and who not to.”

“A brilliant day. Our sprint race yesterday went well, but our endurance race didn’t go to plan with a bonnet issue. We got it together, kept it on the track and worked hard to get the result. It’s amazing with all the different types of car out there and speeds, you have to keep your eyes peeled at all times for action! Hopefully this is the start for me, and there’s more excitement to come.”