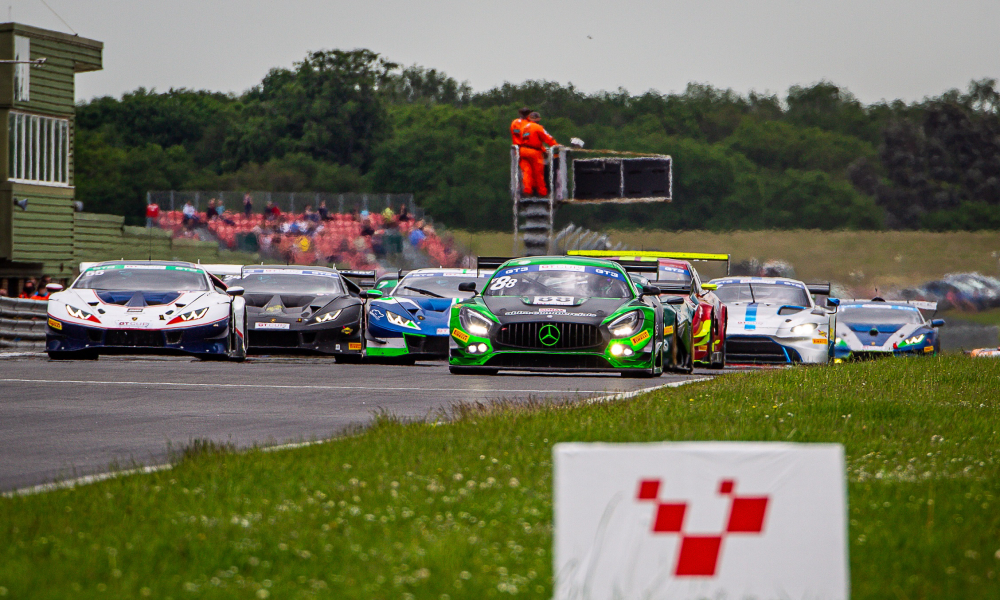 This weekend marks the seventh and final event of the season for the GT Cup as the championship returns to Snetterton for the second time this year.

With another bumper grid of nearly forty cars, fans are in for a treat. Invitational entries are bumping up the numbers for several groups – Groups GT3 and GTH (the GT Cup's GT4 group) are the most well-represented. An impressive array of machinery will make up the grid with ten manufacturers represented from McLaren to Marcos.

The championship is entering its final phase and there are four races worth of points left up for grabs. Those entrants who've started all eight races in the last two rounds are eligible for bonus points, so there may yet be some shuffling on the points table! Sam and Richard Neary still just about have their hands on the trophy but after technical issues at Donington Park, Topcats Racing's Warren Gilbert and Jensen Lunn are that little bit closer behind them. There will be some complicated maths to come as the possible outcomes of the championship are worked out but at the moment, it's still all to play for!

The top five cars in the overall title fight are leaders of their respective groups. Currently sitting third is Simon Orange, leader of Group GTA and now sole pilot of the Orange Racing Ginetta, while his fellow Orange Racing driver Josh Jackson (leader of Group GTH) sits fourth. Current Group GTB leader Nick Phelps sits fifth, now quite a few points clear of his nearest group rival. The team championship is currently in the hands of Orange Racing, though with both of their cars leading their respective groups, this should come as no surprise.

The team's domination is stretching to the new Sporting Challenge with the top spot held by Simon Orange. The challenge is only open to teams with purely sporting line-ups and it's Paddock Motorsport's Moh Ritson and Tom Rawlings sitting behind him.

This weekend at Snetterton will stick to the two-day race format, which means there are still two more sets of Sprint Race points up for grabs in the Sprint Challenge. Valluga Racing's Nick Phelps holds a fourteen-point lead over Simon Orange with Josh Jackson just one point behind his teammate.

Let's take a look at the grid in more detail, starting with the biggest group of them all – GTH.

Just one invitational entry joins Group GTH this week – Redline are entering a Porsche Cayman Clubsport GT4 for Alex Malykhin. Malykhin will be hoping for a better outing at Snetterton following an eventful weekend at Silverstone back in August.

The rest of the group is made up of the full season cohort, currently headed in points terms by Orange Racing's Josh Jackson and Michael O'Brien. The pair have quite the lead to second and third in the title fight – though that battle is rather a lot closer. Balfe Motorsport's Mike Price and Callum Macleod hold onto second place by less than five points from Feathers Motorsports' James Guess and Darren Turner.

A glut of McLarens make up the core of Group GTH – as well as the Orange Racing and Balfe entries, Greystone GT has three of their own. The #22 for Richard Mason and Jon Lancaster, the #77 for Mark Hopton and Adam Carroll and the #23 for Iain Campbell and Oli Webb have all improved throughout the season and will no doubt be hoping to end on a high. Sticking with the McLaren theme, Paddock Motorsport have their two cars– the #26 of Moh Ritson and Tom Rawlings and the #44 of former GT Cup champions Steve Ruston and John Whitehouse.

It's not all McLarens though in GTH. Valluga Racing are also representing Porsche with their Cayman Clubsport GT4 in the hands of Carl Cavers and Lewis Plato. As well as the Feathers' Aston Martin, Century Motorsport return with their Vantage GT4 for David Holloway and Bradley Ellis. It's been a mixed bag this season for the Century car, but the pair are still well-within striking distance of the top five points scorers.

Group GTA is still living up to its nickname of GT-Ginetta, though with one less than usual as Scott Sport's Craig Wilkins and Aaron Scott will be skipping this weekend. This largely leaves Simon Orange to scamper away with the Group Title (barring no mechanical trauma) and could allow a few other players to move up the board. Currently third in the points standings is Makehappenracing with Century Motorsport's second car not that far behind. Fox Racing and the second Orange Racing Ginetta round out the group standings, but there is still plenty to play for.

The third group in the batch with GTH and GTA is Group GTB which has an invitational entry of its own. Chris Murphy who has frequented Group GTH this season returns to Group GTB this weekend alongside Michael Coker in their Aston Martin GT N24 – run by the folks at 24-7 Motorsport. The Aston will have no bearing on the championship as Charlotte Gilbert in the #3 Topcats Racing Marcos Mantis tries to close the gap on current GTB points leader Nick Phelps.

Our second batch of runners covers Groups GT3, GTO and GTC. With nine entries this weekend, Group GT3 is the largest group for this batch, with several new faces joining the grid. Greystone GT are back with their McLaren 720S for Andrey Borodin and Ed Pead, while Enduro Motorsport are sticking with their GT3 machinery for Morgan Tillbrook and Marcus Clutton.Two British GT teams join the fold for Donington Park – G-Cat Racing's Shamus Jennings and Greg Caton are entering their Porsche 991 GTR GT3 and Ultimatespeed's Matt Manderson will be running the Aston Martin Vantage GT3.

FF Corse have brought back their Ferrari 488 GT3 for Laurent de Meeus and Jamie Stanley, while Lucky Khera pops back into the group with his Lamborghini Huracan GT3.

This should all provide plenty of on-track competition for our full-season runners. Team Abba Racing have already sewn up the group title, thanks to some excellent results for Sam and Richard Neary. Things are still fairly close between second and third though so it could be a good fight between Lamborghini and Nissan. Triple M Motorsport/Tecserve's Grahame Tilley has Sennan Fielding alongside him again this weekend in the GT-R GT3 and Scott Sport's John Dhillon and Phil Quaife will no doubt be looking to keep the pair at bay to retain their second-place spot.

Group GTC is again a good-sized group this weekend with five cars lining up on the grid. Group points leaders Jensen Lunn and Warren Gilbert will face on-track competition from two invitational entries. Roy Millington and Benny Simonsen are clearly enjoying their time in the GT Cup as they're back for another set of races, and FF Corse are running a Ferrari 488 Challenge for Ron Johnson and British Touring Car ace Tom Ingram. Stanbridge Motorsport will be running their two usual two cars this weekend as Chris Kemp and Stuart Hall return to the grid.

The final three cars on the grid belong to Group GTO with several very different bits of machinery. Paul Bailey and Ross Wylie have made a substitution with the Brabham BT62 being benched. The pair will be running a McLaren GT3 Canam as the Brabham undergoes some work. Raw Motorsports' Ben Dimmack and Steve Burgess took some solid results last time out at Silverstone and will no doubt be looking for more of the same in their Radical RXC GT3. Making a welcome return this weekend is Richard Chamberlain. The CTR Developments team have completed work on their finicky Porsche 935 and will be bringing the fight to their Group GTO rivals.

There will be plenty of action at the GT Cup Season Finale at Snetterton, so be sure to keep an eye on our social media channels to stay up to date. There will also be live video coverage of all four races on the GT Cup Facebook and YouTube channels, with live tweet coverage available on Twitter too.