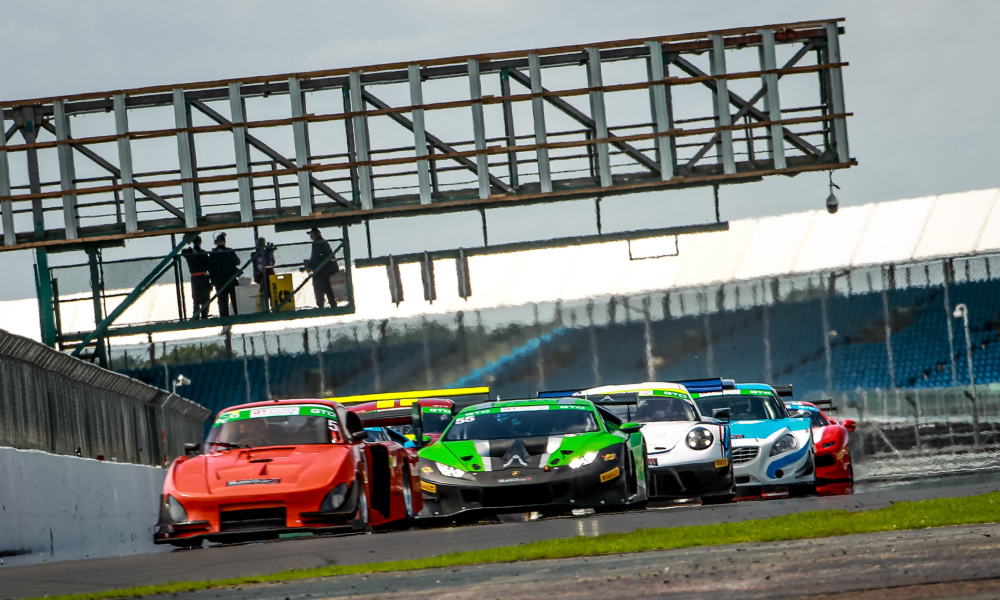 Richard Chamberlain and JMH Automotive were the big winners of the opening day of GT Cup Championship action from Silverstone, on a Saturday that ended with a variety of new faces sealing silverware in Northampton.

Chamberlain grabbed the sprint race spoils from pole position, before Jamie Stanley charged through to win the 50-minute encounter later in the afternoon after a fierce battle in the opening laps between Chamberlain and John Seale.

GTC was a clean sweep for FF Corse, while in GTA a double win came Ivan Milutinovic’s way in his Porsche Cayman. McLaren took wins in GTH and GTB thanks to Balfe Motorsport and WDC Racing, Top Cats Racing also claiming a sprint race win in the latter group, while reigning champion Adam Hatfield returned to win a three-car GTH endurance scrap.

The short and sharp 15-minute qualifying session featured a hard-fought tussle for top spot between Seale and Chamberlain. The former put his Lamborghini quickest initially, but a late flyer put Chamberlain’s CTR Developments Porsche 935 on pole position for the day’s opening race.

The pair then took their fight into the opening sprint race of the weekend. A fast-starting Chamberlain got the jump on his Lamborghini rival, but Seale kept the Porsche man honest for much of the 25-minute contest in the overall and GTO fight for success. Chamberlain triumphed, taking his seventh victory of the season in the process.

The GTC dice was a closely-contested affair also, won by the charging FF Corse Ferrari 488 Challenge of Dan de Zille, which made its way by the Lamborghini Huracan Super Trofeo of James Webb which edged the battle early on.

Group GTH was taken by the Balfe Motorsport team, with Nick Moss behind the wheel of one of the experienced team’s two McLaren 570 machines. GTA was won by the aptly-named GTA Motorsport team and its Porsche Cayman, Milutinovic sealing spoils ahead of Team HARD’s Ginetta G55. Frank Mortensen showed his experience from Snetterton, beating his McLaren rivals for GTB victory in the Top Cats Racing Marcos Mantis.

Seale had his revenge in the first endurance race later in the afternoon, aided by a fine charge by Stanley in the second stint to surge clear for success for the fifth time in the endure outings this season.

Seale had initially grabbed the lead from Chamberlain, only for the Porsche to nab back the advantage around the outside at Brooklands. A throttle problem removed Chamberlain from the mix late on, former single seater racer Craig Dolby moving up to second in GTO with Nigel Mustill in their Nissan GTR.

GTC was a competitive affair, with FF Corse holding the cards as Adam Carroll - sharing with Laki Christoforou - came from behind to win the group in their Ferrari 488, snatching the victory ahead of the sister car of Ross Wylie and Richard Guy who came so close to returning to the series with a win.

GTB spoils were sealed by the WDC Racing McLaren of Rob Young and Matt Le Breton, while GTA honours went the way of the Porsche Cayman of Milutinovic once more. In GTH, the return of Adam Hatfield was a successful one with Whitebridge Motorsport, as the reigning GT Cup champion moved his and Steve Birt's Aston Martin Vantage ahead of team-mate Chris Murphy and Balfe Motorsport’s McLaren 570 in a dramatic three-car dice for the group win.

#55 John Seale:
“It was a great race. I had to get past Richard in the second race, but then once I did it, I had to try and keep it there. I held him off for about four or five laps, but he found a way past me, so I thought I’d sit there pretty until the pit stops and let Jamie take up the fight. I definitely enjoy racing him - he’s a tough old driver, and a good driver.”

#27 Adam Carroll:
“It was a good race between us. The first flying lap I put in was good and consistently it was strong. These cars are hard work, and you have them absolutely on the ragged edge at all times. It was nice to see Ross Wylie having to do a bit of work up front and sliding around. He was doing a good job of making that car wide; we were racing very fairly, and as close as you could get before I saw some traffic in front that was my best chance. He went one way, I went the other and it paid off. Great racing.”

#66 Ivan Milutinovic:
“I got a bit excited at the end of the race! We didn’t expect to come here and win the group at all actually. This weekend was all about coming along and having some fun, and we managed to get two wins in the opening day.”

#17 Rob Young:
“We had great fun. Testing was difficult because it was wet, but in the dry the car was great. It’s a bunch of mates having a laugh and driving fast cars. Clean racing all round too, and we’ll definitely be back for more rounds after this. Matt Bell has given us some great advice - he knows how to drive well, and as we’ve never driven the car around here, we felt we could do with that bit of advice which helped us a lot.”

#12 Adam Hatfield:
“A really good race for us. Steve left us in a very fortunate position to be able to run up front and challenge for the win; we obviously came out behind a McLaren and were pushing all the way trying to force them into an error, and a battle in front meant that we inherited the chance to win. We had really good pace after just one day of testing. I love this championship, have many great memories and its good to get back in.”