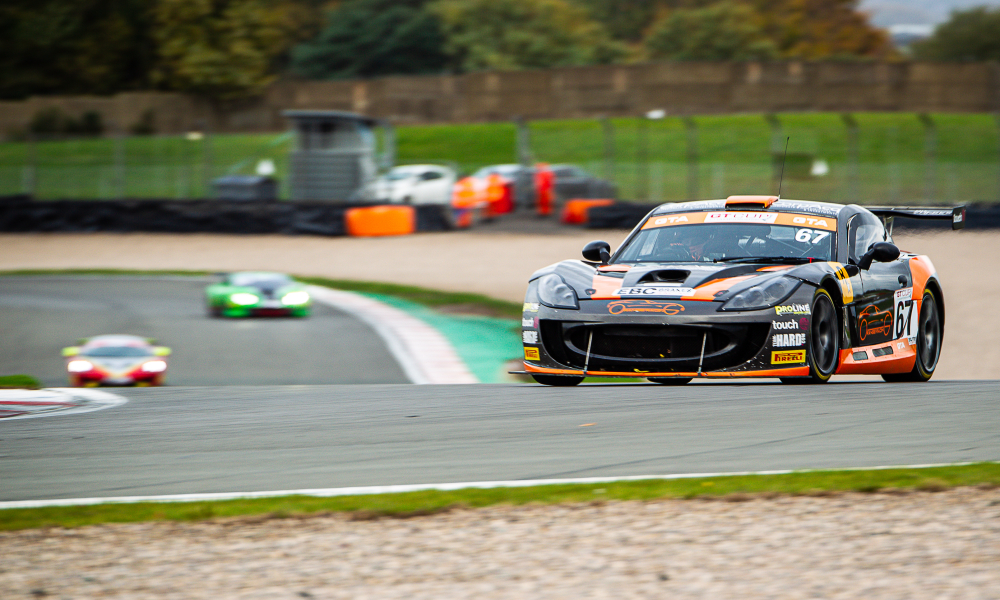 Team HARD Racing's Simon Orange and Joshua Jackson secured the 2020 GT Cup Championship title despite having to replace a driveshaft on their Ginetta G55 GT4 in the Endurance Race at Donington Park.

It was more success for Team HARD as Ben Clayden and Sam Randon took the GTB Class title in their Porsche 911 GT3 Cup with a pair of class wins on a day that was dominated by JMH Automotive's John Seale and Marcus Clutton at the head of the field.

Making the decision overnight to run the Lamborghini Huracan GT3 in the unrestricted GTO class, JMH added to its Saturday endurance success with stunning victories in both of Sunday's races, Seale taking out the Sprint to ensure three triumphs at Donington.

Henry Dawes added to his pair of wins yesterday with GTA victory in the Endurance Race, but was pipped to a clean sweep by the Makehappenracing Ginetta in the Sprint. Newbridge Motorsport took a pair of wins in its GTH-spec Aston Martin Vantage while John Dhillon did the same in GTC in his Scott Sport Ferrari 488 Challenge.

With restrictions removed from Seale's Huracan, the Lamborghini blasted its way to pole with a 1m06.148 - two seconds quicker than John Dhillon in the GTC Scott Sport Ferrari 488 Challenge which took a brace of front-row starts.

Sam Randon was the highest of the overall title contenders as he secured third - and GTB pole - in his Team HARD Porsche 911 GT3 Cup. He shared the second-row with the Makehappenracing Ginetta G55 GT4 after a great lap from Chris Hart snatched GTA pole away from Henry Dawes by 0.036s. Matt Topham took a pair of GTH poles after a faultless session in the Newbridge Motorsport Aston Martin GT4.

Under rare sunny skies, John Seale dominated the 25-minute sprint race. Holding off Dhillon into Redgate on the first lap, even a first-lap safety car couldn't deny the JMH Automotive driver from adding a second triumph of the weekend.

Using the grunt of his Huracan, Seale quickly put himself out of range of Dhillon's Ferrari. The Scott Sport driver finished second - winning class GTC - 18 seconds behind. Third went to GTB class winner Sam Randon, as a faultless drive from the Team HARD Porsche racer secured the class title for him and Ben Clayden with a race to spare.

JMH Automotive secured a dominant hat-trick in Sunday afternoon's endurance race as Seale and Clutton topped the race from lights-to-flag. Holding off Dhillon at the start, Seale extended his advantage over the Ferrari driver and handed over to Clutton with a comfortable lead, which was maintained until the chequered flag.

It was equally comfortable for Dhillon and co-driver Phil Quaife who kept their noses clean to take second overall and another GTC Class victory.

GTH provided a masterclass from Alex Toth-Jones who put in a string of remarkably quick laps in the Newbridge Motorsport Aston Martin Vantage to overhaul eventual GTB winners Clayden and Randon to take the final spot on the overall podium, in addition to the team's class win.

The race's drama came from eventual overall title winner Joshua Jackson as he slowed coming down the pit straight. Pushed back into the garage, his Team HARD squad replaced the Ginetta G55's driveshaft in just 10 minutes to allow Jackson and co-driver Simon Orange the opportunity to formally take the title on-track.

Henry Dawes continued his remarkable clean sweep of Sunday's running as he powered to his third GTA win of the weekend, in his first appearance in the Domino's Pizza Ginetta G55 having moved up from the VW Fun Cup.

"Unfortunately for Josh, we had a tactic of I'd do the endurance race by myself on Saturday and he'd do it on Sunday because he's too nervous watching apparently! The driveshaft broke on him when he was racing really well. The whole weekend was a little bit frustrating. Because we were so far ahead, we were driving defensively - especially in the rain yesterday - but we got two wins and that allowed us to relax a bit today and that gave Josh the opportunity to have a proper go at the invitiational cars in the Endurance Race."

"We were going all out to finish the season on a high and win the race, we didn't have to look out for the points. It's a shame the driveshaft went but it's better that it did it today when it didn't matter as much rather than yesterday when it did. They did a great job to get it replaced. We've had a great season, a bit of good luck, a bit of bad luck. We got the wins when we needed them and sealed the title, which was for our objective for the year - on to 2021 now! "

"What is so sweet for us, and it feels like a win, is taking second in the overall championship. Lady luck was on our side, someone was looking down on us today, so not only did we secure the GTB championship, the car we were battling for P2 overall didn't make it to the grid which then secured the runner-up spot overall. It's great for the team to have first and second overall. It's such a lovely end to the year, working with Ben has been amazing, it's been a strong pairing especially considering his experience - or lack of - so brilliant to come away with so much success."

"It's been amazing. It's been learning for me, just the second weekend in the car and it's run well all weekend. The result was great, especially in the Sprint Race because the McLaren was behind me the whole time and when I made a mistake he was on my tail, and then he made a mistake and I got a gap again. I felt the pressure but it was good to feel that and it was good to drive the car under pressure. Watching Alex in the Endurance Race was incredible. I don't know where he got that pace from, I thought I was driving the car on the edge but he was incredible!"