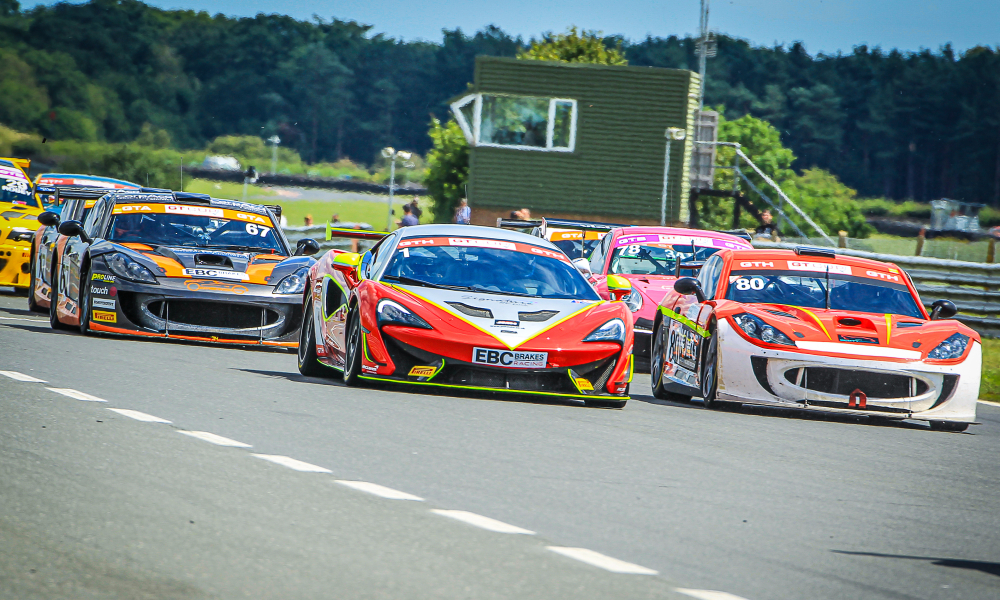 This weekend marks the third event of the season for the GT Cup the third bumper grid for the championship. Following two outstanding weekends of racing behind closed doors at Donington Park and Brands Hatch, this weekend at Snetterton marks the first time this season where fans can enjoy the action trackside.

A huge thirty-eight car grid will line up at the Norfolk circuit for what promises to be a fantastic event. Each of the GT Cup's six groups is well represented, with five GT3 entries and a whopping 12 cars in Group GTH. Be sure to keep an eye out for the SB Race Engineering Brabham BT62 in Group GTO as well as a trio of Lamborghini Huracans in Group GTC. If you're a fan of Ginettas, Group GTA is for you with seven taking to the track this weekend.

With six races done and dusted, the championship points tables are starting to shape up. Leading the way in the overall title fight are Jensen Lunn and Warren Gilbert in the Group GTC Topcats Racing Lamborghini Huracan. Just two points behind them are the Group GT3 points leaders, Richard and Sam Neary of Team Abba Racing. The two cars may not be on-track rivals as they come from two different groups, but that doesn't stop them fighting for the overall title.

In fact, the top four cars in the overall title fight are leaders of their respective groups. Third in the fight are Richard Marsh and Sam Randon, leaders of Group GTB, while last year's champions and current Group GTA leaders Simon Orange and Josh Jackson sit fourth. Our Group GTH competitors sit relatively far down the overall standings – a sign of an extremely competitive group! Though currently leading the group are a pair of familiar names – Simon Orange and Josh Jackson in the second of their entries, the McLaren 570 GT4.

With the return of a two-day race event comes more Sprint races which means more opportunities to rack up points for the Sprint Challenge. This challenge takes points only from the sprint races and currently has James Guess of Feathers Motorsport sitting at the top with Scott Sport's Craig Wilkins just one point behind.

The new Sporting Challenge is looking interesting too with the two Simon Orange and Josh Jackson entries taking the top spots. Not far behind them however is Andy Robey who is faring well in his new Marcos Mantis.

Looking at the grid, there will be plenty of competition for the points on offer this weekend in each of the groups. Group GT3 has five runners for this weekend, with a bonus entry joining our full-season teams. Leading the group in terms of points is Team Abba Racing. Sam and Richard Neary have had an excellent season so far, claiming a big points haul from Donington Park and Brands Hatch in their Mercedes AMG GT3. Grahame Tilley currently sits joint second in the group standings and has his usual teammate Will Tregurtha back in the Nissan. John Dhillon and Phil Quaife share the second-place spot in the standings also with 94 points. Lucky Khera in the Simon Green Motorsport Lamborghini Huracan rounds out the Group GT3 tables. Joining the quartet of full-season entrants is the Ultimate Speed Aston Martin Vantage GT3.

Seven further cars make up the first batch of runners on the grid – four in Group GTO and three in Group GTC. Starting with Group GTO, John Seale and Abbie Eaton have stolen the points lead in the group after a great run at Brands Hatch. Paul Bailey and SBR Engineering have returned the Ferrari to its stable and plan to bring the Brabham BT62 out at Snetterton with Ross Wylie behind the wheel as Bailey's teammate. The pair sit joint second in the GTO points tables alongside Raw Motorsports' Ben Dimmack and Steve Burgess. The final car in the group is the unique Porsche 935 of Richard Chamberlain.

In Group GTC, the trio of Lamborghini Huracans take to the track to continue their all-Italian dual. Leading the way in the group, and overall title race, is the #9 Huracan from Topcats Racing. Jensen Lunn and Warren Gilbert have dominated the group thus far, taking four wins from six races. Second in the group is the #96 Stanbridge Motorsport car in the hands of Chris Kemp and Stuart Hall. The second Stanbridge entry of James Simons, Fraser Smart and Graham Wilson sits third in the points standings.

The second batch of runners for this weekend is made up of Group GTB, Group GTA and Group GTH.

There has been a change at the top of the GTH standings as Simon Orange and Josh Jackson have knocked Feathers Motorsport's James Guess and Darren Turner down to second. Third in the title fight is the #90 Balfe Motorsport McLaren 570 of Mike Price and Callum MacLeod. The top three face a lot of on-track competition and it's very much all to play for.

The majority of the field are full-season runners, but Valluga Racing have entered a Porsche Cayman Clubsport GT4 for Rob Myers and Sean Doyle this weekend. The newcomers will face competition from a further eight GTH cars including Valluga's full season entry for Carl Cavers and Lewis Plato. Century Motorsport's David Holloway is keeping Bradley Ellis aboard the #15 Aston Martin Vantage GT4 having benched Adam Hatfield. Greystone GT have two of their three McLarens lined up to compete with Iain Campbell and Oli Webb in the #23 and Mark Hopton and Adam Carroll in the #77. Moh Ritson and Tom Rawlings have done well to maintain fourth in the points standings and the #26 Paddock Motorsport McLaren will no doubt be looking for some more good results. Paddock Motorsport's second car for the weekend is in the hands of former champions Steve Ruston and John Whitehouse. Finishing up the Group GTH gird are Whitebridge Motorsport's Chris Murphy in the #72 Aston Martin Vantage GT4 and Enduro Racing's Mercedes AMG GT4 with Morgan Tilbrook and Marcus Clutton behind the wheel.

Group GTA gains a non-Ginetta entry this weekend alongside the seven strong G55 cohort. Vector Racing's Peter Jackson joins the grid in his Lotus Exige. Currently topping the points tables is Orange Racing's Simon Orange and Josh Jackson ahead of Craig Wilkins in the #80 Scott Sport Ginetta. Century Motorsport's second full-season entry of Alex Stevenson and James Kellett sits third. Fox Motorsport and Makehappenracing continue to match each other coming into this weekend on equal points. Completing the grid are Orange Motorsport's second Ginetta entry in the hands of Russ Lindsay and Patrick Collins and an invitational entry from Team Hard.

The final six cars on the grid belong to Group GTB, made up of five full-season entrants and one invitational. Leading the way in the group is Team HARD Racing's Richard Marsh and Sam Randon, despite a DNF at Donington Park blotting their winning streak. Andy Robey seems to be settling into his Marcos Mantis very well and sits second in the championship. Nick Phelps has upgraded to a full-season entry and the Valluga Racing Porsche is third in the title fight. It's been mixed luck for our final two full season entrants. Both the Marcos Mantis of Charlotte Gilbert and 24-7 Motorsport's Porsche in the hands of David Frankland and James Hillery have had a handful of DNF results and will be hoping for better luck here at Snetterton.

There will be plenty of action this weekend, so be sure to keep an eye on our social media channels to stay up to date. There will also be live coverage of all four races on the GT Cup Facebook and Twitter pages.