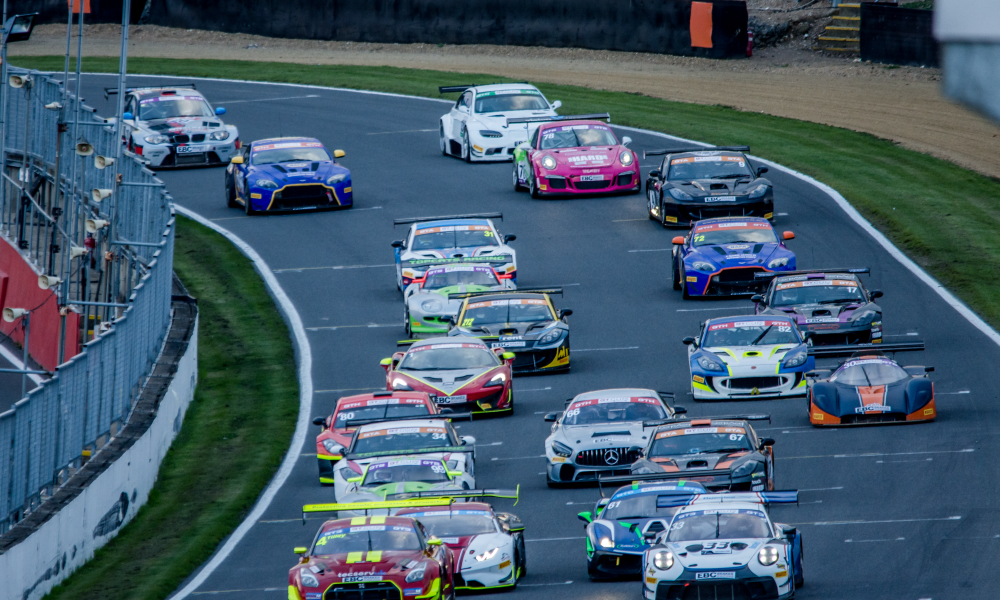 Forty-six entries to take on Super Saturday at Brands Hatch

After a cracking season opener at Donington Park, the GT Cup heads to the Garden of England for the May bank holiday weekend. Brands Hatch is our host for the second weekend of the season, with the full GP circuit in play.

They say records are made to be broken, and the grid for this weekend is another record-breaker for the GT Cup. A total of 46 cars will fill the Brabham straight for what promises to be some incredible racing. Groups GT3 and GTH are taking the spotlight with 25 entries between them, including a slew of British GT teams getting some practice in before their season starts later in May. Our GT Cup stalwarts will have to tackle extra competition from the likes of Team Parker Racing, Barwell Motorsport and G-Cat Racing.

Due to the sheer size of the grids this season, the championship has changed the format slightly to adapt to the extra pitlane traffic. The groups are now split into two batches, each with its own pit window to allow competitors to complete their mandatory pitstops more easily. Groups GTO, GT3 and GTC make up one batch, with groups GTB, GTH and GTA forming the second.

The Brands Hatch weekend itself also looks a bit different than when the 2021 calendar was first announced. Due to external influences, the weekend has been condensed into one day and the track time changed up a bit. The two pit groups will now have their own 15-minute qualifying sessions on Saturday morning, and the sprint race has been extended to a full 50-minute pitstop race.

Talking of points, currently leading the points race is the GTC entry from Topcats Racing. Jensen Lunn and Warren Gilbert snapped up 97 points during the season opener at Donington Park, thanks to a clean sweep of victories. There's just one point in it though, as the Group GTA Ginetta of Simon Orange and Josh Jackson had a similarly good outing at the Leicestershire circuit. A further four points behind is the Team Abba Racing GT3 entry of Richard and Sam Neary. Sam Neary originally had plans to run in Group GTH with Jason Garrett, but the team has decided to compete in Group GT3 for the full season.

Looking at the grid, there will be plenty of competition for the points on offer this weekend in each of the groups. With 11 entries this weekend, there are an extra four runners in Group GT3 for Brands Hatch, with six different manufacturers represented. Having upgraded their entry to a full season, the father-son duo of Richard and Sam Neary comes into this weekend the team to beat in terms of the championship. The pair had an excellent outing at Donington Park, proving to be nigh unbeatable in their Mercedes AMG GT3. Grahame Tilley currently sits second in the group standings and has brought in a new teammate for Brands Hatch. As Will Tregurtha is away on VLN duties, young gun Sennan Fielding gets a run in the Nissan NISMO GT-R GT3. Third and fourth in the title fight are a pair of Lamborghini Huracans from Scott Sport and Simon Green Motorsport. John Dhillon and Phil Quaife came away from Donington with a pair of podiums, while Lucky Khera had to skip the final race of the season opener due to business commitments.

Our four full-season runners will have plenty of on-track competition from a brilliant selection of invitational entries. Barwell Motorsport has entered a pair of GT3 Huracans in the hands of Adam Balon and Leo Machitski, while WPI Motorsport's Michael Igoe and Phil Keen complete the six-strong set of Lamborghinis. A pair of Porsche 991 GTRs join the grid in the form of G-Cat Racing's Shamus Jennings and Greg Caton and Team Parker Racing's Nick Jones and Scott Malvern. Ultimate Speed is bringing an Aston Martin Vantage GT3 to the table with Matt Manderson and Mike Brown on board – the first Vantage GT3 the championship has seen. Rounding off the Group GT3 grid is the returning McLaren 750S GT3 from Balfe Motorsport with Stewart and Lewis Proctor behind the wheel.

Seven further cars make up the first batch of runners on the Brands Hatch grid – four in Group GTO and three in Group GTC. Starting with Group GTO, group-title leaders Ben Dimmack and Steve Burgess will be looking to net another good haul of points in their Raw Motorsports Radical RXC. Paul Bailey and SBR Engineering have returned the Ferrari to its stable and plan to bring the Brabham BT62 out to play with Ross Wylie behind the wheel as Bailey's teammate. John Seale seems to have settled in well in Group GTO and currently sits third in the title fight. Abbie Eaton will be joining Seale in the Lamborghini Huracan for a second weekend. The final car in the group is the unique Porsche 935 of Richard Chamberlain. Technical gremlins affected the car at Donington Park, so Chamberlain will be looking to make up lost ground.

In Group GTC, the trio of Lamborghini Huracans returns to the track to continue their all-Italian dual. Leading the group and overall title race is Topcats Racing's Jensen Lunn and Warren Gilbert. The pair almost came away with a perfect score from Donington Park but were denied two fastest lap points by Chris Kemp and Stuart Hall in the #96 Stanbridge Motorsport car. The second Stanbridge entry of James Simons, Fraser Smart and Graham Wilson sits third in the points standings, but the team has come on leaps and bounds since swapping from their Lotus to the new Lamborghini.

The second batch of runners for this weekend comprises Group GTB, Group GTA and a huge GTH contingent. This batch promises to deliver some excellent racing thanks to a bumper crop of Group GTH entries and some great rivalries in GTB and GTA.

Currently leading the Group GTH title race is Feathers Motorsport Aston Martin Vantage. Drivers James Guess and Darren Turner had a mixed weekend at Donington Park, but two wins and a podium finish have set them up well. Sitting 19 points behind is the GTH McLaren entry for Simon Orange and Josh Jackson – the pair seemingly faces a bit more competition in this group than Group GTA. Former champion Chris Murphy has opted for a group change for the remainder of the season, upgrading his Aston Martin Vantage to the latest GT4 model to run in Group GTH. They face a lot of on-track competition, and it's very much all to play for.

The full season roster has also been bolstered as Valluga Racing's Carl Cavers and Lewis Plato and Balfe Motorsports' Mike Price and Callum MacLeod have committed to the complete 2021 season.

Paddock Motorsport's Moh Ritson and Tom Rawlings are currently sitting fourth in the title fight and will be looking to get some more points in their McLaren 570S. No doubt their Paddock stablemates Steve Ruston and John Whitehouse have the same goal. Down at Greystone GT, things look a little different. Donington Park was the circuit racing debut for their drivers Iain Campbell and Mark Hopton, so Brands Hatch will serve as another learning curve for the sporting drivers. Though with Oli Webb and Adam Carroll on hand as coaches, the Greystone school is a great place to learn. Talking of pro teammates, Century Motorsport seems to be keeping Bradley Ellis on board with David Holloway for Brands Hatch. Things didn't always go to plan for Holloway in the sprint races, but Ellis proved to be a quick teammate in the pit stop races. Another crew with a mixed weekend at Donington Park were Enduro Motorsport. Morgan Tilbrook and Marcus Clutton claimed two podiums, an 8th and a 10th place finish – they've proven they can get results, but it's a tricky field.

An extra two invitational entries could make the field even trickier as Team Parker Racing and Valluga Racing bring additional cars. Matt and Justin Armstrong taking on driving duties for Team Parker in a Porsche Cayman while Ian Humphries and Benji Hetherington do the same in Valluga's Cayman.

Groups GTB and GTA may be smaller in size but no less competitive. Seven Ginetta G55 Supercups make up Group GTA or GT-Ginetta. Currently topping the tables is Orange Racing's Simon Orange and Josh Jackson, having taken three wins from four races at Donington Park. Stopping the Orange sweep was Craig Wilkins of Scott Sport – the #80 Ginetta stole Saturday's sprint race win and now sits second in the points. Century Motorsport's second full-season entry of Alex Stevenson and James Kellett sits third, thanks to a pair of podiums. Fox Motorsport and Makehappenracing find themselves on equal footing for Brands Hatch – both pairings wound up on 47 points following a close set of results. Orange Racing's Russ Lindsay and Patrick Collins round out the full-season runners, but not the grid – Century Motorsport's Henry Dawes is an invitational entry for Brands Hatch.

The final seven cars on the grid belong to Group GTB, made up of four full-season entrants and three invitationals. Leading the way for the full seasons is Team HARD Racing's Richard Marsh and Sam Randon, despite a DNF blotting their Donington Park streak. A remarkable weekend for Andy Robey puts him second in the points – despite not having driven the car until Donington Park, Robey still came away with four podium finishes. On the other hand, Topcats Racing will be looking for better luck at Brands Hatch. A pair of DNFs for Charlotte Gilbert's Marcos Mantis hampered the team's chances at a good points haul. Another team with a mixed bag were 24-7 Motorsport. GT Cup Regular David Frankland came away with a sprint race podium, but later the same day, misfortune struck their Porsche, and the pair couldn't finish the pit stop race.

These four can expect plenty of on-track competition from three extra cars this weekend. Valluga Racing's Nick Phelps is back for another attempt at a set of trophies in his Porsche 911 Cup. Another German manufacturer joins the roster in the form of a BMW Evolution from Geoff Steel Racing with Sam Allpass behind the wheel. Finishing off the bumper Brands Hatch grid is Alp Racing's Saker Rapex in the hands of Alan Purbrick and David Brise.

This Saturday promises to be an incredible day of GT Cup racing on the world-famous Brands Hatch circuit. With well over forty cars vying for track position, you can expect plenty of action. Don't forget - the two races will be broadcast on the GT Cup Facebook and YouTube channels, so you won't miss a minute of racing.