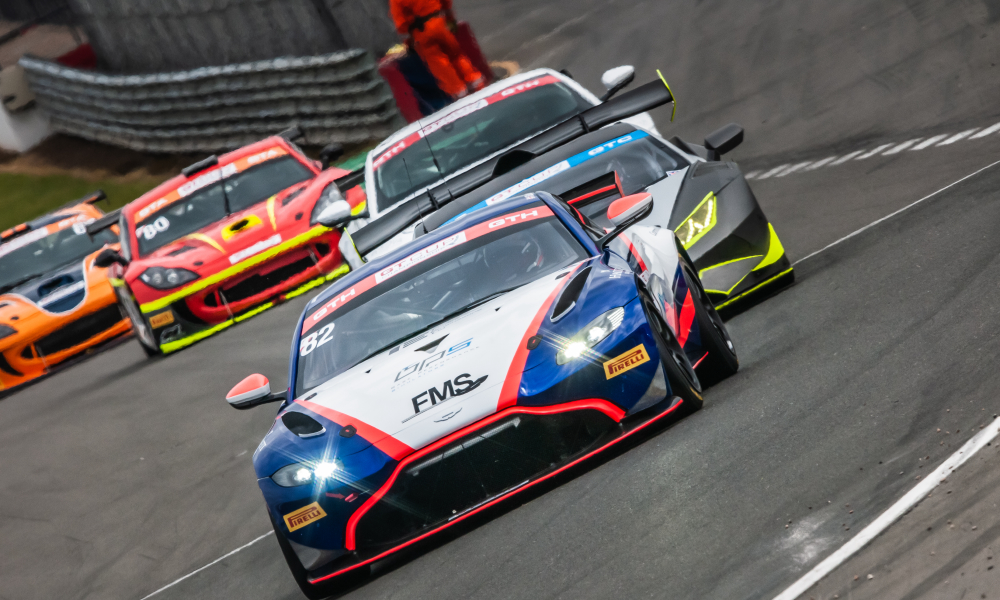 It's the second full season in the GT Cup for the small yet ambitious crew at Feathers Motorsport. After dipping their toe into the championship in 2019, the team made quite a splash in their first full season last year, claiming second in the Group GTH championship.

Founded back in 2014, Feathers Motorsport has grown in a relatively short time, starting with a lone Porsche 968 CS, the team were championship winners in the BRSCC's AMOC Intermarque Championship by 2016. They grew the stable of Porsches to three, but in 2018 the team made the jump to GT racing with the purchase of a Ginetta G55 GT4, and the rest is history. For 2021, the team is upping their game, drafting in Darren Turner and a new Aston Martin Vantage GT4, and so far, it's proving to be a success – the team is currently leading the Group GTH championship.

Behind the wheel this year are James Guess and Darren Turner. A formidable driver pairing that works well together both in the car and out of it. One of Feathers' main sponsors is Base Performance Simulators – a sim centre run by Guess and Turner. These two know each other inside and out, working together throughout the week before hopping into the racecar of a weekend.

Though the original plans for 2021 didn't have Turner in the picture. "I was planning to do the season with my old teammate, James Hilliard, who is another AM driver," admitted Guess. "But I kept seeing all these pros coming in. On my day, I can compete with any of the AM drivers, and with a bit of luck, I can get a good result, hopefully, a victory. But I know at the end of a 50-minute race, if I've got a Le Mans winner or an F1 test driver or whoever behind me, they're going to get me. They've done it all their lives. I haven't." Guess realised that to remain competitive, their plans might have to change.

The team was already aware that their Ginetta potentially wasn't going to be a match for the newer cars in Group GTH and the new raft of Pro drivers joining the group confirmed that they would need to up their game. Thanks to a cheeky "D'you fancy doing GT Cup?" to business partner Darren, Feathers suddenly had a Le Mans winner in their ranks, and the plans began to ramp up. Turner's ties with Aston Martin meant a new Vantage GT4 made the most sense, so the team acquired a nearly new model from customer team David Appleby Engineering.

Alongside the new car, Feathers also signed up former Appleby engineer Reece Beard. With Tom Holland already on board as their number one mechanic, the team now had a pair of engineers who had plenty of experience building and running the Aston Martin. The small motorsport team was starting to look like a potential giant killer.

Three testing sessions and a race weekend later, and the team's preparations seem to have been paying off. A podium and a sprint race win at Donington Park for James Guess brought them a good haul of points. A second win in Sunday's endurance race added another 25 to Feathers' already impressive tally. Unfortunately, a first lap incident for Guess in Saturday's endurance race denied them a run at victory. Still, despite an extra stop, they managed an impressive sixth-place finish, securing their position at the top of the Group GTH points tables.

Feathers have set themselves up for a heck of a 2021 season. With James Guess gaining more confidence in the new car and Darren Turner waiting in the wings for the endurance races, the team is in an excellent position. Some might argue that with his pedigree, the GT Cup is a step down for Turner, though he has picked an excellent time to join the championship. With healthy, competitive grids and plenty of other pro drivers to battle against, he's definitely enjoying himself. Darren has also watched his teammate grow in skill and confidence, saying Guess has adapted well to the change from the Ginetta.

James has already made his intentions clear: the team wants this to be their year. "We want to have fun, but we want results too. We want to try and challenge for the championship properly this year." He said. "I think the championship is going to be really good. We're all competitive; that's why we come out and do this."

It's still a long way to go, and a lot can happen in this title fight yet, but you can guarantee that Feathers Motorsport very much has its eyes on the prize.