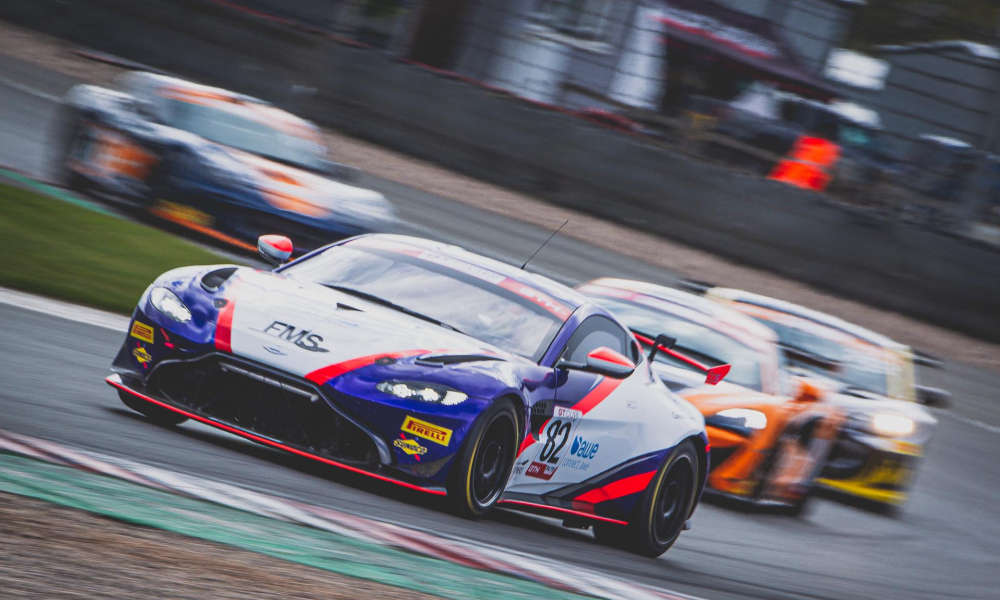 Sunday's GT Cup action at Donington Park produced spectacular racing, and double wins for a number of teams across the championship's six groups.

An overall double triumph went to the GT3 Abba Racing Mercedes family duo of Sam and Richard Neary. The former dominated the Sprint from pole, and beat away the challenge of WPI Motorsport's Phil Keen in the Endurance race later in the afternoon to make it three wins from four at the Leicestershire circuit.

Double success also came the way of Team Orange powered by JMH (Ginetta) in GTA, Feathers Motorsport (Aston Martin) in GTH and Team HARD's Porsche in the GTB group, the latter after a feisty Sprint duel with Valluga Racing's entry.

Sunday's 15-minute qualifying session was a much tighter affair at the sharp end of the field. Richard Neary this time took control of the Abba Racing Mercedes GT3, and instantly put down the marker to beat. He finished 0.6s clear for a second pole position of the season, beating Lucky Khera's impressive effort in the Lamborghini Huracan.

The second Sprint race of the weekend was a frenetic affair for the 38-car field, briefly interrupted by a smattering of snow falling late in the race. It did not stop Sam Neary pulling away from a solid start to confirm a second win for the Abba Mercedes, beating Khera and the Nissan GT-R of Grahame Tilley.

All but one of the group pole-sitters managed to hold onto their top spots. Guess was the only differential after climbing seven places during the race, grabbing the GTH win in a hectic scrap after the Deranged Aston Martin's demise out of Old Hairpin. GTA was only just taken by Simon Orange's Ginetta, holding the similar car of Craig Wilkins at bay.

GTO spoils went to the Porsche of Chamberlain, which finished fifth overall after a battling display against GT3 opposition. GTC was claimed by Gilbert's Lamborghini, while a wonderful intra-Porsche dice between Team HARD's Marsh and Valluga Racing's Nick Phelps went in favour of the former despite his rival's best attacking attempts.

The final battle between the Abba and WPI outfits went through several twists and turns over the 50-minute endurance outing. Richard Neary started the Mercedes for the former, hanging on grimly for much of the race before Igoe finally slipped inside his GT3 rival exiting Coppice just before mandatory pit stops.

Cycling through the stops, Igoe handed over to Phil Keen who lost out in time differences during the changes, leaving him with over 18s to close on a flying Sam Neary. The latter hung on to make it three overall and group GT3 wins at Donington, finishing 18s clear at the flag while Will Tregurtha charged through the field to third in his Nissan GT-R with some fine overtaking efforts.

The GTO class went the way of Raw Motorsport's Burgess and Dimmack, while Topcats Racing's Jensen Lunn and Gilbert made it a clean sweep of GTC group wins and Darren Turner joined sprint winner Guess to win GTH for Feathers Motorsport once more.

Team HARD made it a double GTB win in their Porsche 911, a feat matched in GTA by the Ginetta of Simon Orange and Josh Jackson.

"The races went really well, and the tyre pressures were mega this time. The team prepared a really good car, so I’m really happy. I had a few cars between me and Lucky Khera [after the sprint race safety car] so I was lucky with that. Managed the gap from there and saved the tyres for the final race. The snow was weird, it was only on one part of the track so the first few corners were very sketchy and then after you got past that it was alright.”

"I had a good start, got ahead of the Deranged Aston and then the Orange Racing McLaren got me down the inside at Craners because I ran a bit wide. I thought I’d bide my time, because I knew I had the pace on him, took my time and got the pass. Then it was really just a case of avoiding the traffic from all the other classes and manage the race – you’re not racing the GTB and GTA cars really. The rain, or the snow, on the windscreen looks like a biblical storm so I was a bit cautious on the last lap and a half, but apart from that I brought it home and got the win. I felt we had the pace in the car, so it was about getting it right and making sure you didn’t slip up and let someone get ahead who you couldn’t catch up.”

"That was fantastic! We had a bit of a battle with [John] Dhillon as well in the GT3 car. We got fastest laps and won the class, the car was fantastic – I really enjoyed it actually, it was great. I sort of set my heart on getting past Dhillon, which I did, but then he got past me again and then the rain came down so I just decided to take it easy but I didn’t have any comms with the team so I didn’t know what was going on or whether I had fastest lap or anything. I’m blessed that Jensen gave me a drive in his car, I really appreciate it and together we seem to be making a really good team."

"I’m really glad to be back, great organisation as always from the Bute team. We’re starting development from scratch because over the last year we completely redid the front suspension, we did have it first on struts and now we’ve got double wishbone and we’re now double lost! We only finished the car on Wednesday."

“Nick Phelps behind me, it was his first race, he’s doing exceptionally well! He was all over me for all of the race, we couldn’t get past a Lamborghini in front, they’re blocking like mad, then we caught some GT4s up. It was hectic, fun, but had to be aggressive to keep going; one mistake and three or four cars would have gone past you. You come out smiling, we’ve won that’s great but it was so much fun. Nick didn’t give me an inch at all. I’ve just seen him with a massive grin on his face as well so that’s all that matters doesn’t it? This is brilliant, the grid is pretty special isn’t it?”