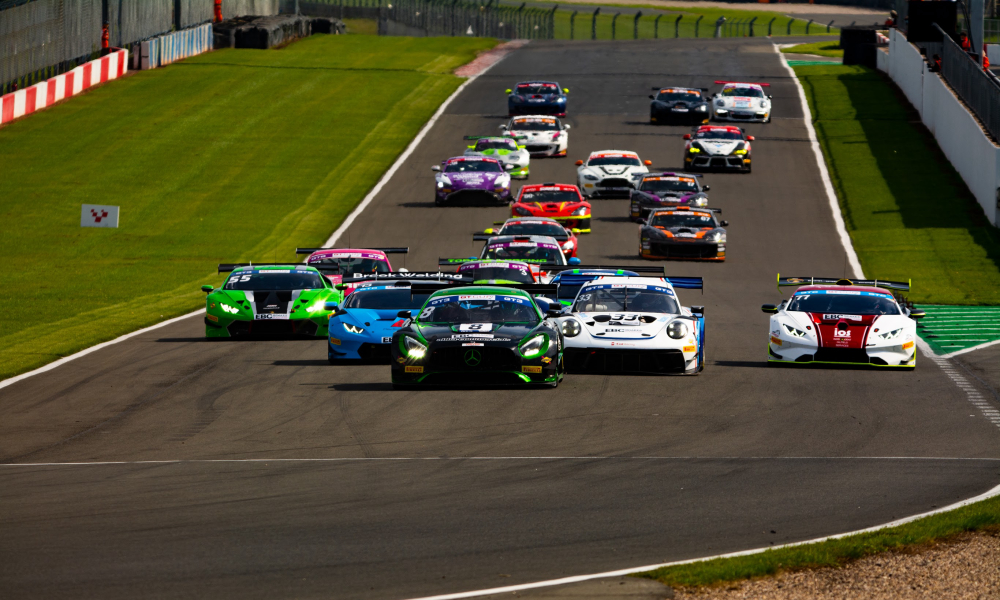 The dominant double came courtesy of Joshua Jackson who won both races from pole position in the class, something which overall and GT3 race winner Sam Neary repeated to add to Richard Neary's Saturday sprint win. Neary's race two win was later stripped from him for a yellow flag infringement, gifting a victory to G-Cat's Jennings and Greg Caton in the enduro.

The GTC battle between Ferrari and Lamborghini ended with honours shared over the day, while GTH was again in the hands of defending champions JMH Automotive with two wins for their McLaren. GTB was a frenetic affair, Topcats Racing sealing a dramatic sprint win before David Frankland returned to winning ways with the help of former GT Cup winner and Ginetta champion Will Tregurtha.

Sam Neary could celebrate another pole position with the Abba Racing team on Sunday as the Mercedes topped the 15-minute qualifying session by over 1.8s ahead of closest rival Shamus Jennings in the G-Cat Racing Porsche.

The GTC cars closed in and this time it was GT Cup stalwart James Webb who topped the class times with a late surge good enough for the Lamborghini Huracan Super Trofeo driver to pip Jim Geddie’s Huracan by 0.3s. GTB pole went to the Team HARD Porsche 997 of series leader Sam Randon and Ben Clayden, while JMH Automotive continued their surge with another GTH pole in the #1 McLaren 570. Team HARD’s Ginetta’s battled for GTA’s top spot, Jackson taking pole.

After Richard Neary’s sprint race success on Saturday, it was the turn of the younger Neary to put on a show as he thumped the opposition in the first 25-minute contest on Sunday from pole position. Jennings came closest, but was a distant second and held off the attentions of GTC opposition which was initially headed by Webb.

The latter looked set to lose out to Geddie who swooped by into the lead, but a wheel issue cost them the GTC class win on the final lap and handed Webb his first win of the season three races into his return.

A dramatic GTB class battle was won by Warren Gilbert in the Topcats Racing Marcos Mantis, but only after surviving a big spin following contact at the chicane exit with Tom Barrow’s Saxon BMW 150 GTR. Both took excursions, Gilbert grabbing the win while there was further drama as then-series leader Randon ended in the Coppice gravel travel after an incident with the GT3 Lamborghini of John Seale.

GTH honours were more easily distributed, as JMH Automotive continued their perfect weekend for the McLaren thanks to Steve Ruston this time, backing up John Whitehouse’s success 24 hours prior. GTA was a lights-to-flag show by Team HARD’s Jackson in their Ginetta G55, even breaking into the top nine overall with a dominant display.

Sam Neary started the Abba Mercedes once again in the 50-minute pit stop race, and another rapid opening lap made the difference as he left Jennings trailing in the first stint to give the team the advantage before mandatory stops. Greg Caton gave chase and closed the 40s lead cushion to just 13s by the flag, but after the race a yellow flag-related judicial resulted in the exclusion of the Mercedes from race. Caton and Jennings therefore were victorious for the first time in 2020.

GTC was topped initially by Scott Sport before an off for John Dhillon at Old Hairpin while battling with Seale gave Webb the class lead. The latter’s Lamborghini hung on once Phil Quaife took over the recovering Ferrari, but it proved too much as Quaife found his way by to give Scott Sport another class victory and deny Webb a Sunday sweep.

GTB was an unpredictable affair. Initially headed by Randon’s Porsche, the car fell into the clutches of Gilbert’s Marcos after stops cycled through. A mechanical problem halted the Marcos driver’s race prematurely however, while Barrow’s BMW and Clayden’s Porsche both slipped back in incidents at the hairpin. Even before the drama, through came David Frankland and a charging Will Tregurtha in their 24-7 Porsche to win, while JMH Automotive denied Chris Murphy and Whitebridge Motorsport a GTH win with a late pass to confirm a clean sweep for the reigning champions.

GTA was dominated by Jackson once again, and problems for the sister Team HARD Porsche meant the Ginetta driver takes over the championship lead heading to Brands Hatch GP circuit on 10/11 October.

“It was a tough result to get, and it cost us some damage but it ended up turning out perfectly for us come the flag. We lucked out a little bit with the Porsche not finishing, but then we ended up in an incident with the BMW and somehow managed to get out of it. It’s hard work and gets harder! We’re really pleased with the result and it was a good scoop of points for the Topcats team, and third for Charlotte was a great result as well. The car is so physical and she’s getting better with more track time.”

“It’s been a good fight for the start of our season. We went testing here earlier in the week to get used to the tyres and make the changes we need to make it a stable platform. It seems that we have some flashes of good performance over the weekend, and that showed in qualifying which we were really happy about. I felt we extracted the most out of the car. In the sprint race, it looked like we had it covered before the feel of the car changed suddenly and Geddie got past. They’ve driven well and it’s showed, but we stuck in and took advantage at the end to take the win which we’re really happy with.”

“On pace, we got up to everybody and got past them all just on pace alone, and then they all seemed to crash into each other which made it a much safer finish to the race for us. It was just mega. Really good fun, and it’s a really nice car to drive, and drive something completely different for me compared to Nissans and Audis without ABS and less aero, but with loads of power. The team have put together a really good car and it shows that with effort you can do well; David’s first stint was mega and kept us right in the mix when I got into the car.”

“Not a bad weekend at all; pole, two wins on Sunday and we’ve now moved up into the lead of the championship so it’s been a good one. We had a bit of bad luck at first, but there’s even more in this car and in that last race we kept the pace sensible once we were in the lead and held onto it. It was a warm race but a lot of fun. I won’t start thinking about titles until we’re back at Donington, so it’s about looking at winning at Brands now.”