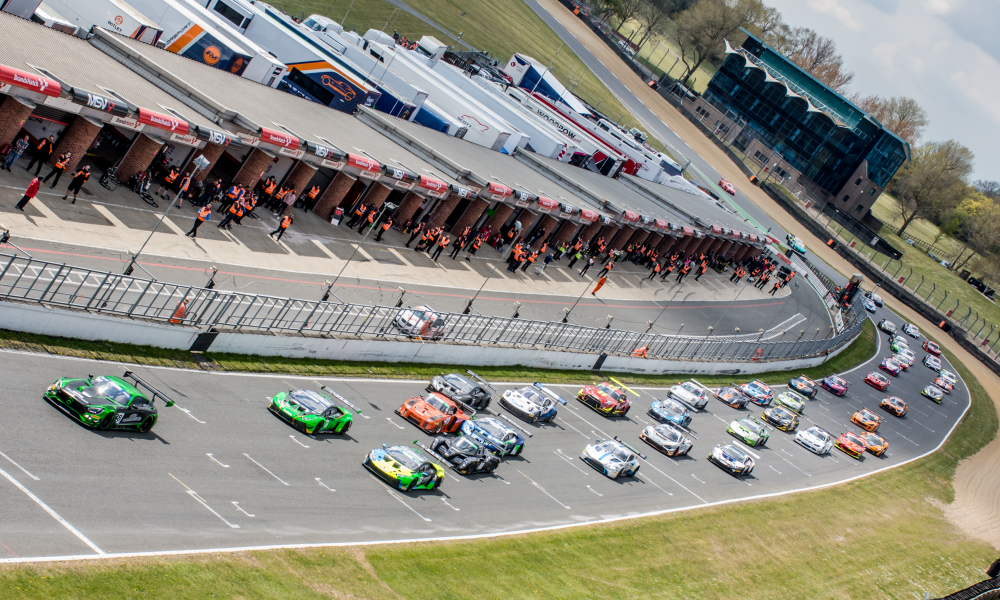 Following on from the mass grids at Donington Park, a whopping 45-car entry list graced the Brands Hatch GP venue for rounds five and six. A late three-car scrap for race one honours went the way of Balfe Motorsport, who grabbed the McLaren 720's first GT Cup win in dramatic fashion before Abba Racing's Mercedes GT3 added its fourth win of the 2021 campaign in race two.

The remaining groups were fiercely competitive, with wins in GTB for Team HARD and Geoff Steel Racing, GTA triumphs for Scott Sport and Century Motorsport, and a fine double for the reigning champions Orange Racing Powered By JMH in their McLaren 570s.

The extensive grid required a brace of 15-minute qualifying sessions - three groups permitted to run in each.

The initial session was dominated by GT3 contingents, with treble Donington winners Abba Racing on pole position with a strong time good enough to beat their main rivals WPI Motorsport by over a second at the flag. Barwell Motorsport's two Lamborghini Huracans followed in close proximity, with the top GTO entrant being the Porsche of Chamberlain. The GTC class was topped by Topcats Racing's Lamborghini Huracan.

The second session went the way of Richard Marsh and Sam Randon who topped GTB in their Team HARD Porsche 911.1 Cup car, beating away the attentions of GTA pole-sitters Century Motorsport - with Henry Dawes in the Ginetta G55 - while the GTH group was headed by the unmissable Orange Racing Powered by JMH McLaren 570s.

A thrilling opening race ensued in the early afternoon, which was not short of excitement from start to finish. Drama began when a brake issue for the WPI Motorsport car consigned it to the pits, before a miscalculation cost the early leaders Abba Racing as the pole-sitting Mercedes pitted before the mandatory pit window opened.

This left Barwell's Huracan duo up front, with Leo Machitski heading Adam Balon's similar entry up to and after the pit stops cycled through. A brief safety car late on spiced up the action however. Machitski defended from a charging Scott Sport Lamborghini which had moved up to second immediately with Phil Quaife now at the wheel, after taking over from John Dhillon, Quaife soon diving inside the leader at Surtees.

Delaying the pair, the third-placed Balfe Motorsport McLaren of Lewis and Stewart Proctor pounced on both and grabbed the lead - having started 12th on the grid - and a maiden GT Cup victory for the McLaren 720S thanks to a bold move at Hawthorn Bend by Lewis Proctor around the outside of Quaife. The GTO class spoils went the way of John Seale and Abbie Eaton, after a strong recovery from the former in the early laps for a second win of the season. GTC resulted in another win for the rampant Lamborghini Huracan of Topcats Racing, with Warren Gilbert and Jensen Lunn behind the wheel.

GTB produced a fabulous battle. The Team HARD Porsche grabbed back a lost lead from the Geoff Steel BMW Evolution of Sam Allpass, but two time penalties cost the former for infringements, handing Allpass a hard-fought victory. GTA was claimed by the Scott Sport Ginetta G55 of Craig Wilkins and Aaron Scott, while Simon Orange and Josh Jackson added a first GTH win of the day in their McLaren.

The Abba Racing squad made amends in fine style later in the afternoon with a dominant victory in the second 50-minute contest, Richard Neary doing the damage with a vital early overtake on Balon's Barwell Lamborghini.

The GT3 winners came home almost 30s clear of Balon, but the drive of the race came from another Lamborghini in third, as Michael Igoe charged through from 44th on the grid to third overall with Phil Keen after a fine display of overtaking. Chamberlain's Porsche also carved through the pack to clinch a well-earned GTO group victory, briefly running inside the top five among the swarm of GT3 cars.

In GTC, a maiden win of the season came the way of Stanbridge Motorsport's Lamborghini thanks to the efforts of Stuart Hall and Chris Kemp, in a race where Topcats hit trouble following a spin at Sheene. GTB was another tough battle between the BMW and Porsche of Geoff Steel and Team HARD, with the latter claiming the victory for Marsh and Randon.

GTA spoils went to the Century Motorsport Ginetta of Dawes, overcoming a flying Wilkins in the process. Orange and Jackson doubled up their GTH tally with a second win in their McLaren.

The next GT Cup Championship meeting will take place at Snetterton's 300 circuit over the weekend of 5/6 June 2021.

"It was busy. It was all kind of happening around me! I was really happy with the car, these short races are really good fun because you can just go hell for leather, no tyre management – just flat out! Enjoyed myself thoroughly, made some good moves. Hats off for the championship for getting such a big grid, it’s busy for sure – there’s a lot of traffic to tend with. But, it’s all good practice, there’s plenty of championships that have similar sized grids so it’s all welcome. Getting the first position was a bit of a hand-me, I just drove past down the back straight. But round the outside at Hawthorn with Quaife, was more fun. I know Phil so it was good to get that one under my belt. I had seen it enough on YouTube and I was like: ‘yeah I’m going to do it!’ and that was kind of it! I just checked my mirrors afterwards and I was still pointing the right way!”

"We had a good ding-dong, me and Adam, it was cool. With racing someone like Adam – I’ve raced him for a few years now – we’re both honest with each other, so you do have the opportunity to race each other without knocking each other off. I think we had good pace today, me and Sam both love this circuit. This is actually my favourite and my worst track at the same time!"

"Brands GP always provides us with some good entertainment! Certainly was very busy out there, but credit to GT Cup for putting on an amazing show. More than 40 cars on a track like this, some big names as well. I’ve loved every minute of it. We’re all racers, we want to get stuck in and go for it. This track is a proper old school place where you make a mistake and you’re in the wall, not like these new tracks where you can get away with a lot so it’s really good. I think I speak for every driver when I say I love coming here, we don’t get to race here enough. Really enjoyed it and very much looking forward to Snetterton in a month’s time."

"It was a really busy one out there today. What a grid of cars, it’s made for some great racing. The BMW really brought the race to us today, we didn’t have it easy so it was great to spend some time behind him and having to get past him. The BMW was very competitive but it was good to have someone to race, I enjoyed it. It brought the race to us and we weren’t alone out there so really enjoyed it. There was no clear air, you’d get through one group of cars and then you’d be on the next group, and then the next group. The traffic from behind as well in terms of the GTCs and the GT3s, it was just full-on!"

"To be honest, it was quite busy – the boys in front were knocking lumps out of each other and I took the view of sitting here and watching it for a bit. I did that, and they went in and we got a bit of luck – A, I think we pitted at the right time and some of the guys got held up, and the main thing was we gained loads of time under the safety car. It all evens out, some bad luck in the first race, and then some luck under the safety car in the second race – so that’s the way it goes!"

"It was a bit of a crazy [first] race! Safety cars threw up a few issues here and there, made it a bit more complicated than it could have been! It was a good first win in the McLaren for me. It was nice to do a long run in the car, get a feel for how it handles and things like that. GTH is a great class, 14 cars this weekend. It’s nice to have competition, you don’t want to drive round with just a couple of cars. It’s a good mix of different drivers too, you’ve got Le Mans drivers and ex-F1 people as well, so it’s makes it more interesting and you can see how you stack up against everyone else."