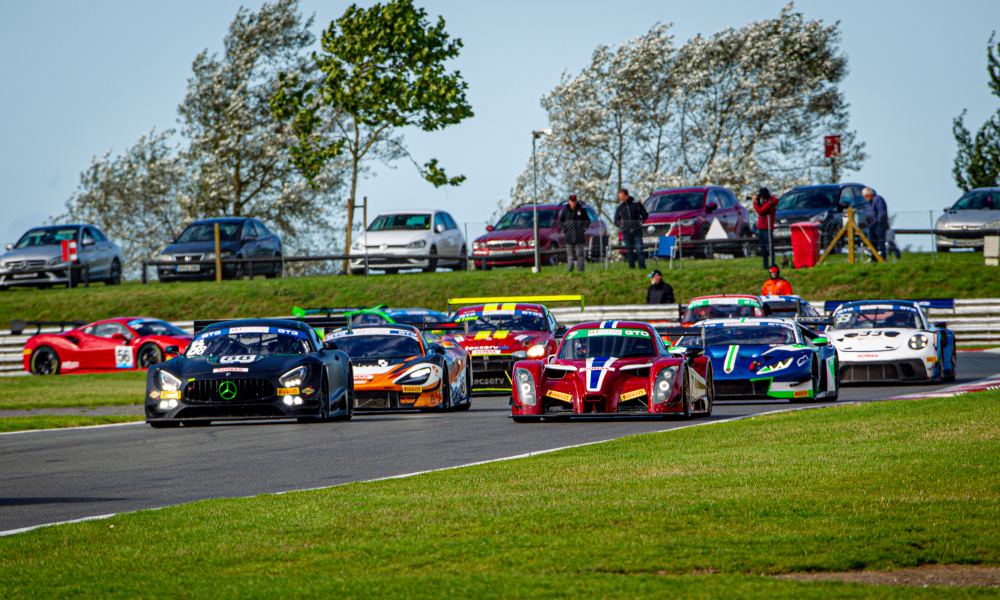 Sam and Richard Neary claimed a maiden GT Cup Championship title victory for Team Abba Racing in a thrilling season finale at Snetterton, beating away the threat of Topcats Racing after a fighting finish in Norfolk.

After 17 wins, the father and son pairing of Richard and Sam Neary ensured their title charge would be well on track with a victorious start on Sunday for the former, and the GT3 champions finished the job in style with second place behind Enduro Motorsport's McLaren to clinch the overall crown.

Abba Racing's Sunday success meant that they would do enough to pip the Topcats Racing team's new Lamborghini Huracan Super Trofeo to the overall title, although the duo of Warren Gilbert and Jensen Lunn brilliantly took the GTC title in the debut debut season of their new weapon.

The GTB class enjoyed a new winner in Charlotte Gilbert and the first for the ever-popular Marcos Mantis overall in GT Cup, but a trio of wins for Nick Phelps ensured the Valluga Racing Porsche driver could clinch the Group title and the Sprint Challenge trophy in only his first season in the the championship.

GTH title honours were placed in the hands of the #1 car of Orange Racing with JMH Automotive, which claimed a brace of wins on Sunday after victories the previous day went the way of Paddock Motorsport's two McLaren entries in the damp. Paul Bailey and Ross Wylie won the GTO title, racing in a McLaren CanAm after efforts in Brabham and Ferrari machinery also in 2021.

The Orange squad could celebrate a double title triumph thanks to Josh Jackson and Simon Orange as its Ginetta G55 also clinched the GTA group spoils. Group wins at Snetterton went the way of the similar Ginettas of Makehappenracing and the sister #17 Orange Racing car on Saturday, while Sunday victories went to Fox Motorsport and the championship-winning Orange car.

The much predicted rain made its presence felt just before the start of the afternoon Sprint Race, after a dry qualifying session which was dominated by Sam Neary earlier in the afternoon.

At the start, Richard Neary battled from pole to keep in front of a storming Steve Burgess - the latter enjoying more grip in the faster corners to get a stronger exit onto the straights. After Neary dropped back, the race became a three-way scrap between Burgess, Morgan Tillbrook and leader John Dhillon. The trio battled tooth-and-nail in the last couple of laps but after the worsening conditions caught out leader Dhillon, Burgess leaped into the lead.

A drag race to the line went the way of the Radical man by just 0.240sec, with Tillbrook second - and winning Group GT3 - while Dhillon recovered well to third overall right on their tails. Nick Phelps wrapped up the GTB title with a group win in a race in which he prevailed in an exciting battle with in-form GTA winner Chris Hart (makehappenracing).

Despite a spin, Warren Gilbert added to his trophy cabinet with a 13th GTC victory. Moh Ritson secured his third victory of the season for Paddock Motorsport, in a swashbuckling run to the GTH top spot.

Weather remained an issue ahead of the second race of the weekend, but a new winner emerged as drivers fought against the downpours once the 50-minute Endurance Race got underway.

A great start for the Sprint-winning Radical gave it the lead but a wide moment dropped it to third by the hairpin. Top spot instead went the way of Tillbrook's McLaren, but it soon surrendered the lead to Richard Neary's Mercedes which made a decisive move out of Oggies heading into Williams Bend.

That would become crucial as the weather became more inclement, creating a brace of safety car interruptions that halted the race early with 14 minutes on the clock. The Neary pairing would be penalised for a short stop that would gift fourth-placed Ultimate Speed's Aston Martin a GT3 group win on its return, but the biggest winner was the Marcos Mantis of Charlotte Gilbert, earning a sensational overall win alongside GTB after electing to stay out before the stoppage.

An inspired pit stop at the earliest opportunity for Bailey put his McLaren up into second overall by the time of the red flag stoppage, ensuring the GTO class victory went to him and Wylie. GTH again enjoyed a entertaining tussle in the early stages, and the late dramas - aided for many by safety car penalty seconds - shook up the order as former champions Steve Ruston and John Whitehouse claimed a group victory ahead of Balfe Motorsport who were a strong second once again.

Phelps ran a superb seventh overall early on, but the late stops bumped him behind Gilbert in GTB, while GTA went the way of Russ Lindsay and Patrick Collins in their Ginetta G55. GTC victory went to the #56 Millington Motorsport Ferrari of Roy Millington and Benny Simonsen in the pitlane shake-up, although third place went to the Topcats Lamborghini which dropped points in the overall title fight.

Brighter skies emerged for the final day of the season, and Richard Neary was fastest out of the blocks to give the Mercedes men the best chance of sealing the overall title.

Sam Neary duly delivered victory in the  Sprint Race with a lights-to-flag effort after passing the quick-starting Radical of Burgess heading out of Oggies on lap one. Burgess hung on to win GTO once more ahead of a charging Tillbrook, while Topcats Racing's Warren Gilbert kept his title chances alive by winning the GTC class once more in the Lamborghini.

GTB was claimed by Phelps, while a fantastic intra-McLaren battle went the way of Jackson after catching and passing the Paddock Motorsport 570s of Ritson on the penultimate lap to win GTH. The GTA honours went to Fox Motorsport's James Townsend in his Ginetta G55.

Just needing to finish to confirm the title in the 50-minute Endurance Race,  Richard Neary did what he needed to do by running up front and then third by the pit window opening, handing over to Sam to complete the task at hand. Marcus Clutton backed up Morgan Tillbrook to win the race for Enduro Motorsport, 32s ahead of the Nearys who clinched their maiden GT Cup title.

It was confirmed when the Topcats Lamborghini fell to third having led the way in GTC early on, the group champions overpowered by the sister Lamborghini of Stanbridge Motorsport's Chris Kemp and Stuart Hall in the second half of the race. GTH and GTA spoils were clinched by the title-winning McLaren and Ginetta respectively of Team Orange.

A great weekend for Phelps ended in another triumph for the Valluga Racing man along with Dino Zamparelli, while fourth overall was enough for the Radical of Raw Motorsport to add another GTO win to the team's name, despite being surpassed by British GT champion Sandy Mitchell in the flying Scott Sport Lamborghini late on for third overall.

"It's been tough but really good. We hadn't won a race in the last six that we had entered, but it's been great that it went down to the wire. I can't thank the team enough. We've worked back-to-back weekends to get the car out, we've re-shelled the car before this season and despite all that, it's been a great season for us. Richard has been incredible this year; we've spent a lot of time in the data room trying to get faster and faster, and this year he's done a fine job with the pace he's shown all year."

"It's great to have won the group title. Qualified on pole in class; obviously it’s a small class but it’s nice to be mixing it with the higher class cars. Track’s incredibly slippery, something went down between turn three and turn seven - it’s incredibly slippy and challenging, but it was good fun and it was a good race. I’ve not thought too much about the title yet, if it’s been confirmed I haven’t seen that, so that’s good. The other one is the Sprint Challenge to see where I am, because I know I was leading it but with the restrictive points I’m not sure how that will pan out. It’s a great end to a first ever season of racing so that’s good, I’m really pleased with that. My driving I know has come on, I’ve been taught well this year. The team at Valluga are absolutely fantastically run by Benji, everyone he brings in is full of enthusiasm, skill and keep you grounded but make you faster."

"We got pole, fastest lap and the win in the Sprint, everything went really well. The car was good and we were really quick out there, so I was really happy. We didn’t test on Friday, and we did the minimum running in the warm-up because Jensen has allowed me to run his car so we’re doing the minimum running to keep the costs down. It’s really sporting with Abba, we’ll be the first to shake their hand if they win it and if it wasn’t for us they would have had an easy run of it so we made them work for it! Jensen came down, he’s had a major operation and he’s on really good form to come down and support us - me and Charlotte, and the team."

“It was a bit of a surprise for me, but it dawned on Darren who is my radio guy and main strategist that there was a good chance that if we waited long enough we would get a red flag. He held me until right until the last minute to pit and then he got me behind the safety car. It was very tactical from him and very foresighted that he thought that there would be a chance they would red flag it and low and behold they did! Everybody else pitted and hadn’t thought the same, and I just happened to have the best guy in the pits! Without going on too much, the conditions were hard for me because I don’t have ABS or traction control, I don’t have paddle shift either. There’s so much torque, you just touch the accelerator and it just lights up - it’s a really big handful in the wet, in the dry I love it!”

"It was a very tough race, conditions were getting worse throughout and unfortunately my power steering failed so it was really hard to control the car with the slides but I managed to keep them behind me. Morgan’s car had a lot more grip off the slow stuff, but luckily for me I had the power, so I could pass him back down the straights."