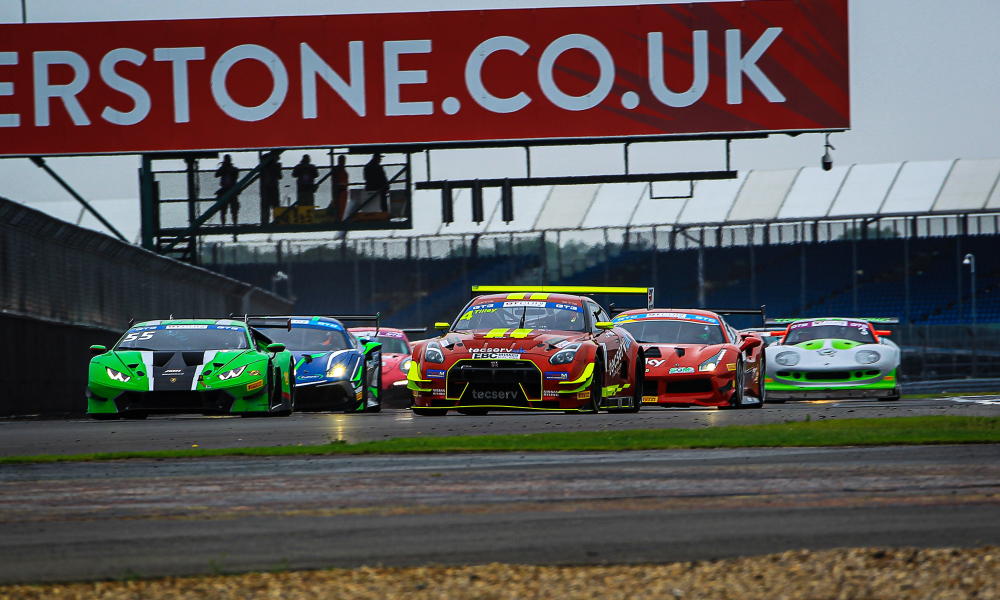 A Summer Spectacular at Silverstone for the GT Cup

A Summer Spectacular at Silverstone for the GT Cup

This weekend marks the fifth event of the season for the GT Cup as the championship returns to the iconic Silverstone circuit. The series returns to a two-day format for this weekend with sprint and pit-stop races on each day.

With another bumper grid of over forty cars, fans are in for a treat. Invitational entries are bumping up the numbers for several groups – Groups GTC and GTH are the most well-represented with nine and fourteen entries respectively. Plus, with the addition of several Ferraris to the grid, eleven manufacturers are represented this weekend. Keep an eye out for the iconic Brabham BT62 in Group GTO as well as a whole host of Ginettas in Group GTA.

Twelve races this season are already done and dusted so the championship points tables are shaping up nicely. There has been a change at the top and Team Abba Racing are now leading the way in the overall title fight. Topcats Racing's Jensen Lunn and Warren Gilbert sit just two points behind in their Group GTC Lamborghini Huracan. The two cars may not be on-track rivals as they come from two different groups, but that doesn't stop them fighting for the overall title.

In fact, the top five cars in the overall title fight are leaders of their respective groups. Third in the fight are Simon Orange and Josh Jackson, leaders of Group GTA, while current Group GTB leaders Richard Marsh and Sam Randon sit fourth. Jackson and Orange take the fifth spot too as they're running cars in two classes. So, it should come as no surprise that with both cars leading their respective groups, Orange Racing are also topping the tables in the team championship.

The Orange Racing domination is stretching to the new Sporting Challenge with the top two spots both held by Orange and Jackson. The challenge is only open to teams with purely sporting line-ups and it's Paddock Motorsport's Moh Ritson and Tom Rawlings sitting third in the Challenge table.

With the return of the two-day race format, there are two more sets of Sprint Race points up for grabs for the Sprint Challenge. Valluga Racing's Nick Phelps narrowly holds the lead in the Sprint Challenge, ahead of Scott Sport's Craig Wilkins and Stanbridge Motorsport's Chris Kemp.

Looking at the grid in more detail, it's Groups GTH and GTC with the most entrants this time around with 14 and 9 entries respectively. Almost all of the groups have been bolstered by invitational entries but don’t forget that those entrants won't be eligible for championship points.

Two of these invitational entries join the GTH cohort for this weekend. Paddock Motorsport are joining forces with Redline to bring a McLaren 570S along for Alex Malykhin and James Dorlin. The second new entry for GTH this weekend is also a McLaren, this time from Fox Motorsport and in the hands of Tim Docker and Jordan Albert. That makes a whopping nine McLarens in the GTH group at Silverstone.

Three of those McLarens belong to Greystone GT – the #22 for Richard Mason and Jon Lancaster, the #77 for Mark Hopton and Adam Carroll and the #23 for Iain Humphries and new co-driver Duncan Tappy. Paddock Motorsport have another two McLarens alongside the Redline entry – the #26 of Moh Ritson and Tom Rawlings and the #44 of former GT Cup champions Steve Ruston and John Whitehouse.

Balfe Motorsport and Orange Racing make up the final two of the GTH McLaren squad. Mike Price and Callum MacLeod have settled into the GT Cup well with some excellent results so far in their vibrant green Balfe car. Meanwhile Orange Racing are shaking things up a little for this weekend, giving Josh Jackson sole custody of the McLaren alongside a new pro teammate Michael O'Brien.

It's not all McLarens though in GTH. Enduro Racing will be in representing Mercedes with the #66 – the duo of Marcus Clutton and Morgan Tilbrook have had an interesting debut season in the championship but have had some great results. Valluga Racing are bringing their Porsche Cayman Clubsport GT4 with Benji Hetherington stepping aboard alongside Carl Cavers. Century Motorsport, Whitebridge Motorsport and Feathers Motorsport are all representing the Aston Martin stable with Vantage GT4s. Darren Turner takes the reigns back from Tom Canning as James Guess' teammate in the Feathers car, and Chris Murphy's Whitebridge Aston makes a welcome return having skipped Oulton Park.

Group GTA is still living up to its nickname of GT-Ginetta with six of them lining up on the grid this weekend. With Josh Jackson taking over the Orange Racing McLaren, that leaves Simon Orange on duty in the Ginetta G55. Scott Sport's Craig Wilkins currently sits second in the title fight, a little adrift from both Simon Orange and Century Motorsport's Alex Stevenson and James Kellett in third. Things are a little closer between third and fifth though with Fox Motorsport and Makehappenracing both within ten points of the Century car. Russ Lindsay and Patrick Collins in the second Orange Racing Ginetta round out the Group GTA grid.

Remember our six groups are split into two batches to make things easier and safer during pit stops. The third group in the batch with GTH and GTA is Group GTB which has a few invitational entries of its own. BMW fans will get to see two new entries at Silverstone as the Saxon Motorsport 1 Series  and the Geoff Steel Racing BMW M3 join the championship for this weekend. Jon Harrison clearly enjoyed his outing at Oulton Park as he's back this weekend in the #3 Topcats Racing Marcos Mantis alongside Charlotte Gilbert. Talking of returners, David Frankland and 24-7 Motorsport are back on the grid following their absence from Oulton Park.

Team Hard Racing's Richard Marsh and Sam Randon may be topping the tables currently, but Valluga Racing's Nick Phelps will be on the scene to try and claw back the points gap. Valluga also have a second Porsche on the grid this weekend as Jan Klingenberg and Ian Humphries join the fray. The final entry for GTB is another invitational entry, this time from JMH Automotive. Sean Winder and Adam Wilcox will be running a Porsche with the team for Silverstone and at the same time raising money for the Children's Intensive Care Unit at Staffordshire Children's Hospital.

Our second batch of runners covers Groups GT3, GTO and GTC. Group GTC is by far the largest group this weekend and has evolved to be more than just the battle of the Lamborghinis. Four invitational entries shake up the group this weekend as three Ferraris and another Lamborghini join the fight. Team Webb are bolstering the Huracan representation as James Webb returns to the championship for the first time this season. FF Corse are bringing two Ferrari 488 entries for Laki Christoforou and the pairing of Roy Millington and Benny Simonsen. Our fourth invitational entry is Kan-Yan Racing with another Ferrari 488 in the hands of Andie Stokoe and David McDonald.

These four should make on-track life interesting for our full-season GTC stalwarts. Jensen Lunn and Warren Gilbert currently top the tables in the Topcats Racing Lamborghini Huracan ahead of Lucky Khera in the LK Motorsport Ferrari 488. Stanbridge Motorsport are changing up one of their driver line-ups as Tim Morley joins forces with James Simons in the #41 Huracan. The second Stanbridge Lamborghini remains in the hands of Chris Kemp and Stuart Hall.

There are a couple of changes in Group GT3 as FF Corse join as an invitational entry with a Ferrari 488 GT3 for Laurent De Meeus and Jamie Stanley, while John Dhillon and Phil Quaife make a welcome return in the Scott Sport Lamborghini Huracan GT3. Will Tregurtha is back on board the #4 Nissan GT-R NISMO and Team Abba Racing's Richard and Sam Neary will be looking to defend their overall title in the Mercedes AMG GT3.

The final two cars on the grid belong to Group GTO with two very different bits of machinery. Paul Bailey and Ross Wylie will be looking to defend their healthy points lead in the group table in their Brabham BT62. Though they'll be facing a challenge from Raw Motorsports' Radical RXC in the hands of Steve Burgess and Ben Dimmack.

There will be plenty of action this weekend at Silverstone, so be sure to keep an eye on our social media channels to stay up to date. There will also be live coverage of all four races on the GT Cup Facebook and Twitter pages.