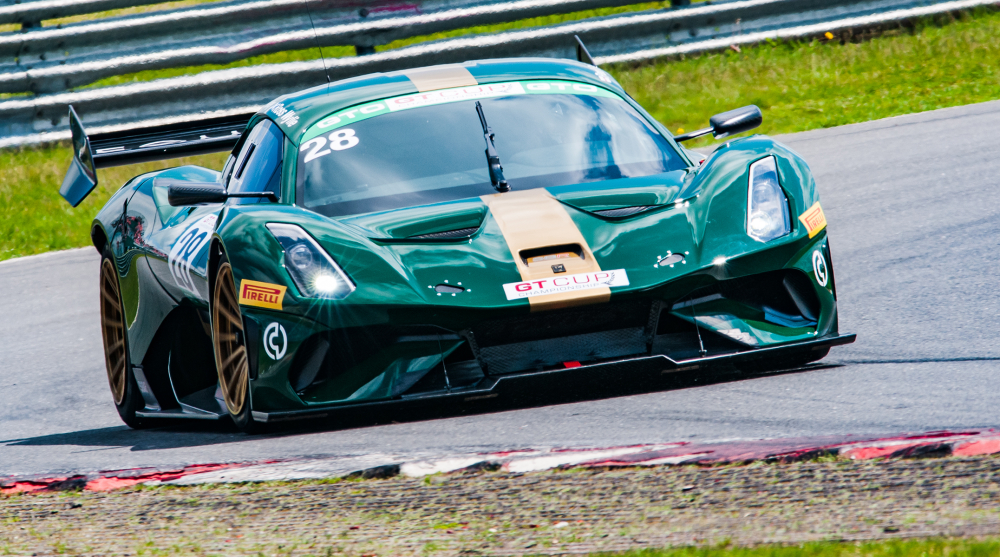 It hasn't been the easiest of seasons for Brabham and SBR Engineering.

Back in January, it was announced that Paul Bailey would be teaming up with Ross Wylie to take on the 2021 GT Cup season in their Brabham BT62 with SBR Engineering. It would be the first time the chassis had taken on a championship and the only one racing in Europe. Excitement for the start of the season was understandably high.

April quickly rolled around and even with a bumper grid; the Brabham was one of the stand-out names on the entry list. The car looked promising in Friday testing, but technical gremlins grounded it for the weekend. And so would be the story for the first two rounds of the season, with Bailey using his Ferrari 488 as a stopgap.

As the British skies started to warm for the summer, so too did rumours that the Brabham BT62 was ready to make its GT Cup debut at Norfolk's Snetterton circuit in June. Again, the car tested well on a rather wet Friday and the stage was set for the team to finally take on their Group GTO rivals.

Saturday started as a day of learning for the team, but it was clear from the timing sheets that both drivers were getting more comfortable in the car. It still sat in the middle of the GTO pack, but the times were improving. Paul Bailey brought the Brabham home in ninth overall, third in their group during the sprint race and the team were looking confident for the afternoon. The car had performed well in its debut GT Cup race.

As the cars lined up on the grid for the pitstop race, expectations were building for the team's performance. Paul Bailey had already knocked several seconds off his personal best during the day, and Ross Wylie is known to be quick in whatever he drives. Lining up eleventh on the grid wasn't the optimum position but the team were ready to carve through the field. And carve they did.

By the time the chequered flag fell, the Brabham was third overall, the fastest lap of any competitor and a maiden Group GTO win. An impressive showing for only the second race in the car. Beaten only by the Team Abba Racing GT3 Mercedes and the Scott Sport Lamborghini Huracan GT3, Bailey and Wylie proved that the Brabham BT62 was a force to be reckoned with. "I've been waiting all season to race the car and I've been learning to do just that," Bailey said after the race. "I found seven seconds from Friday and then three more in the race. It was such a nail-biting finish!"

Bailey's times continued to drop through practice and qualifying on Sunday morning, but damage to the car obtained in the sprint race caused a retirement and cut the team's weekend short. A shame for sure, but the team are sure to be back stronger at the next outing at Oulton Park.

For David Brabham, it's been a great experience seeing the BT62 claim its maiden GT Cup victory. "It’s been a really exciting project." An enthusiastic David said at Snetterton. "Brabham’s been very successful in the past in racing and development of race cars, and of course my Dad (Jack) had the biggest racing car manufacturer in the world back in the 60s."

"Over a period of three decades, there were about 700 cars built. This is the first one in maybe 20 years, so it’s exciting from a family point of view and personal pride. For this project to come through makes it feel full circle. My partners, Future Capital and ourselves, we came together to produce this next chapter of an iconic name that needed something more relevant and sexy to drive the brand forward."

The development journey for the car has been quite an unusual one. In 2014, Project Brabham was launched – a crowdfunding campaign to bring Brabham Racing back as a manufacturer. They smashed their fundraising target and became one of the biggest successfully funded sports campaigns in the world. By 2018, Brabham was ready to introduce its new machine to the world, and the BT62 was announced. The car made its on-track debut in 2019, but 2021 marks its first full season in a full championship.

The BT62 absolutely ticks both the relevant and sexy boxes – the car is hugely competitive on track, plus it looks and sounds fantastic. But what does the future hold for Brabham and the BT62?

"From a racing perspective, of course, the project still has ambitions but to get that first win is great for us and our customers." Said Brabham. "In terms of getting to a race like Le Mans, a lot of that will come from regulations and the variant of vehicle we take. The BT62 is not eligible for example, so it would be a new car, so the first goal is this BT62 model and support for its customers from a competition specification. We can then look to the future and other future variants."

It's clear that Brabham has a lot of faith in SBR Engineering and its driver pairing and trust that they'll help bring more success for the BT62. And understandably so, Paul Bailey and the team have several championship titles to their name, including the 2018 Group GTC title in the GT Cup.

"You have to just look at the history that Paul [Bailey] has had with SBR Engineering in terms of success - it’s pretty impressive," Brabham admits. "Obviously, the team are still learning about the vehicle as it’s fairly new to them, but that’s part of the early process of educating with a new car and developing yourself as a team."

Despite the rocky start, Bailey and Wylie currently sit joint top of the Group GTO points table and if their performance at Snetterton is anything to go by, they might just bring home a title for the Brabham.