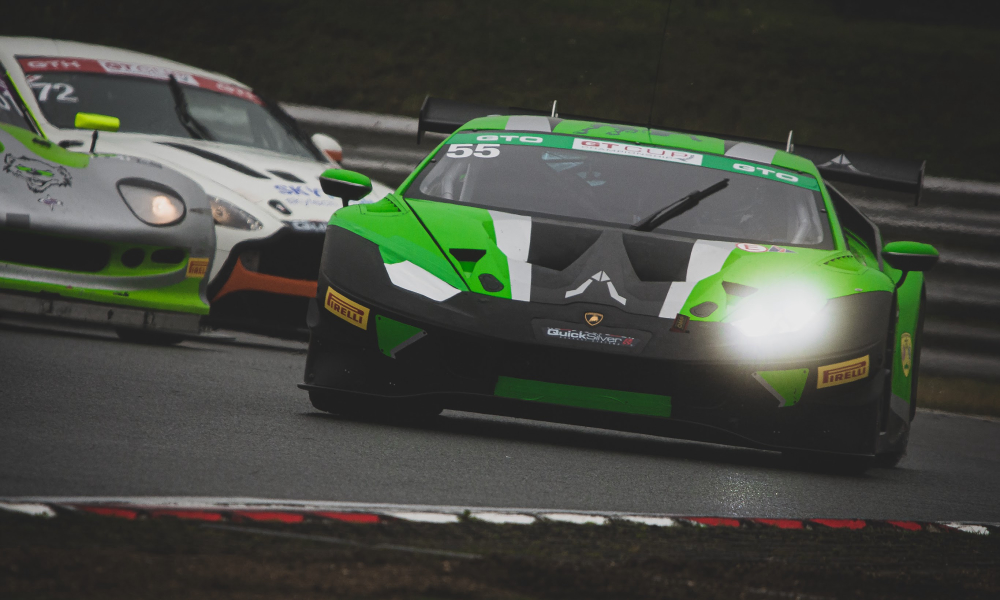 JMH Automotive were the big winners as John Seale and Jamie Stanley took another endurance win in the GT Cup's July visit to Snetterton's 300 circuit. The pair shared GTO spoils with Richard Chamberlain, who clinched a sprint race triumph to remain in championship contention.

Sunday brought more rain to the table in Norfolk, but that did not deter Chamberlain who added another sprint race victory to his 2019 season after fending of G-Cat Racing's Porsche in a tense encounter.

The endurance race was all about the green Lamborghini of Seale and Stanley as they were untroubled from pole, while GTC honours were shared by both FF Corse Ferraris. Laki Christoforou grabbed a sprint race success, before it was the turn of father and son duo Graham and Dan de Zille as they took the enduro honours in GTC.

Chamberlain claimed victory number six of the season, but only just, as he was pushed all the way by G-Cat Racing in their repaired Porsche 911 GT3R. Chamberlain inherited the lead after a lap one moment sent pole-sitter Seale plummeting down the field, Chamberlain hanging on by just 0.3s from Seamus Jennings.

The GTC group was headed by Christoforou from lights to flag meanwhile. The Ferrari pressured Jennings early on in third overall, and was untroubled ahead of a charging James Webb and FF Corse’s second Ferrari of Graham de Zille.

The GTH honours went to Ginetta and Randon, while Team HARD stablemate Chandler survived a spin to clinch the GTA group victory in tricky conditions. Top Cats Racing could celebrate GTB success thanks to Sander Mortensen, who held the lead from pole position.

The second 50-minute contest of the weekend was held under much kinder skies, and it also proved a much more fruitful visit to the 300 circuit for Seale and JMH Automotive.

Surviving a lunge from Jennings on the opening lap, a measured stint meant he handed the Lamborghini over to a determined Jamie Stanley with a solid lead over Christoforou. After mandatory pit stops, Stanley lapped quicker than anybody all day and pulled clear to beat Jennings for a fourth endurance triumph of the year, plus GTO spoils.

GTC was again all about FF Corse, but this time it was the Ferrari 488 Challenge of Graham and Dan de Zille that came out on top, after a race-long dice with the sister car of Laki Christoforou and Adam Carroll which led the opening stint thanks to the former.

GTH went the way of JMH and its McLaren 570 in the hands of Steve Ruston and John Whitehouse, who held the lead from lights to flag. GTA spoils were sewn up by Team HARD to ensure a clean sweep at Snetterton for Kris Prosser and Steven Chandler, while GTB was won by the Porsche of 24/7 Motorsport’s David Frankland after an off for the #3 Top Cats Marcos Mantis.

“John has been rapid all weekend. He did all the hard work in the endurance race to be honest, and I just had to get in and cruise it home at the end. Obviously we had a really tough start to the weekend with an accident in practice on Saturday, but the team rebounded well again. I don’t think there are many more teams that could have put it back together as quickly as JMH have.

“The new 488 Challenge car we’ve got now is amazing. It’s put you on the same level of the other guys in your team that know. We came here last time and put everything in it but you feel disappointed to come away without the result, but now it’s been great all weekend. Watching Dad and Laki racing this morning is what I wanted to see! It was the same yesterday when I was battling with Richard and could compete for the win, so I was looking forward to this weekend.”

“My first run in the car was on Friday, and then I’ve been shaving eight seconds off my time. Saturday was pouring it down with rain, and Kris did a lot of the hard work, and then today I did the same. You can’t complain with four wins - a perfect weekend. Kris got his win yesterday and I got my first individual win today, so it’s been perfect and I’ve really enjoyed myself.”

“We’ve had an up and down weekend for sure. In the first stint in the endurance race we got ourselves a good gap, and then it was just all about hanging onto the lead. I don’t think it handles as well as the other GTH cars in the wet on slick tyres, so I just had to hang on and we got the win in the end.”

“Absolutely delighted. I had a great battle with Del Shelton in the BMW before, and I was sad to see that a few of my rivals fell off the road in the end. But, you’ve got to take every chance you get in motorsport. It’s been sunburn on Friday, and then chucking it down ever since, but it’s the same for all of us and we got a great result.”