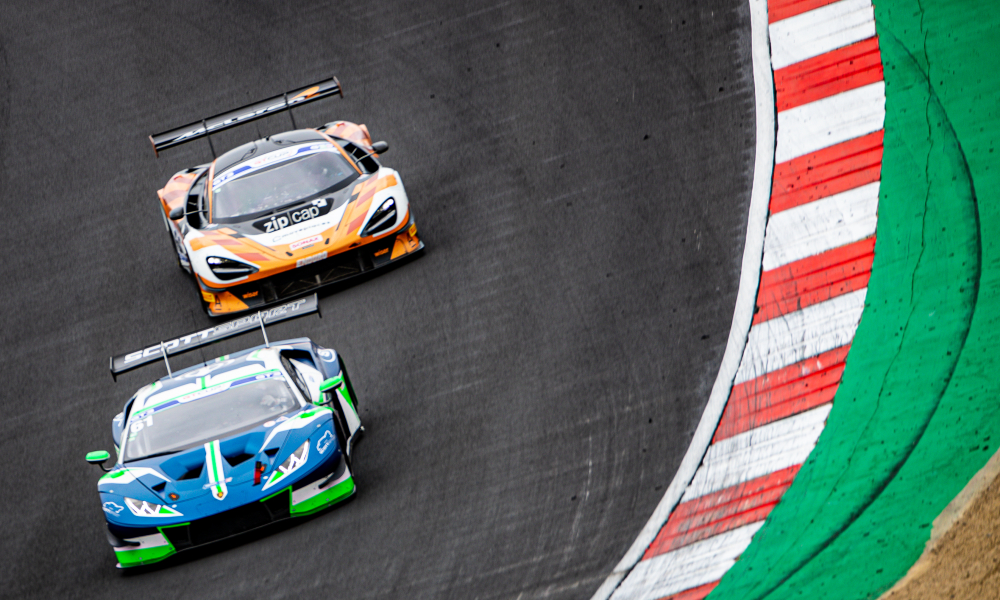 Scott Sport shone brightly when the weather did not on their way to a spectacular victory on the second day of the GT Cup Championship's visit to Brands Hatch, while Lucky Khera enjoyed a double victory in GTC.

A narrow second victory of the season for Enduro Motorsport came in the Sprint race after a spirited defence from Morgan Tillbrook against Saturday's winner Simon Orange, before Dhillon's slick tyre choice proved key to success with Andrea Amici in the Endurance.

Racelab's Khera made it two more wins in Kent in his Ferrari 488 Challenge, while Valluga Racing and Greystone shared GTH spoils. The dominance of Raw Motorsport in GTO was finally broken thanks to SB Race Engineering, while GTB was all about Saxon Motorsport.

Morgan Tillbrook secured a second pole in as many days in his Enduro Motorsport McLaren 720S GT3, but this session proved to be a much harder battle. At first, it was Saturday's Pitstop winner Simon Orange who set the pace in his Orange Racing with JMH McLaren. However, as the chequered flag was unfurled, Tillbrook dug deep and snatched the top spot away.

Raw Motorsport doubled up on poles with GTO honours, while Lucky Khera also bagged himself a brace in GTC with his Racelab Ferrari.

After an extended safety car period to recover a car on the GP Loop, the action quickly burst into life with Tillbrook having to go into full defensive mode to fend off Orange.

The pair pulled clear of the rest of the battling pack behind and engaged in a thrilling duel of their own in their McLaren 720Ss. Tillbrook was always pretty much wise to all of Orange's attempts and placed his Enduro machine perfectly to maintain his lead.

Orange's best opportunity came on the final corner of the last lap. Tillbrook was delayed slightly by a backmarker coming out of Stirlings and Orange had better speed. He couldn't capitalise though, as Tillbrook maintained the inside for Clearways and took the flag first.

Raw Motorsport carried on its sweep of Group GTO, this time with Ben Dimmack pedalling the Radical RXC. Lucky Khera, meanwhile, took a brace of Sprint wins in his GTC Ferrari Challenge.

Valluga Racing took a one-two finish in GTH, with James Wallis putting on a great performance to hold off the sister Porsche Cayman of Matthew Graham by just a quarter of a second. Tom Barrow continued to showcase the Saxon Motorsport BMW's pace, as he claimed an overall top ten whilst also securing GTB honours.

Rain would throw a spanner into the works ahead of race two, meaning tyre choice would become the key moment as cars took the grid for the 50-minute endurance race.

One of the few to take slick tyres was the Scott Sport Lamborghini Huracan of John Dhillon, which turned out to be an inspired team choice. Orange drove away into a comfortable early lead in the McLaren, but would be among many to pit for an additional time due to wet tyres not working well in the changeable conditions.

It left all but one car a lap down on the leading Lamborghini, Dhilllon handing over to Andrea Amici who survived the swarming McLarens of Oli Webb and Michael O'Brien unlapping themselves as he brought home the team's first GT3 win in GT Cup, and their first of the season, ahead of Tillbrook and Marcus Clutton's 720S.

The drama of the first half of the race played perfectly into the hands of the impressive Khera, who added another GTC victory to his name with the help of David McDonald having briefly run as high as second overall in the Ferrari.

GTH also enjoyed another new winner for '22. The Valluga Racing cars changed to slicks having started the race brightest, but the Greystone team kept its McLaren 570 in the fight until the pit stops, after which Mark Hopton and the experienced Euan Hankey assumed the lead and romped clear for a fine group win.

GTB once more went to the Saxon Motorsport BMW, but the GTO stranglehold was finally broken by the McLaren Can-Am of Paul Bailey and Ross Wylie after swapping from their Brabham BT62 used the previous day.

"Don’t know where it came from! The car felt so good and the tyres felt great so just thought it’s now or never. We’ve been on the edge a number of times and this weekend, everything felt right so just sent it! We started on old slicks for the pitstop race, and I was super nervous at the start when the team said old slicks - I had a little heart attack. I did the first lap and realised it was the right choice and that was it, I just went for it and started picking a few cars off and the confidence built as I went along. I didn’t even know I was in first until the lads told me in the last couple of laps! Absolutely loved it, best day."

"We had to bring the old McLaren out again but we ended up in a situation where we just needed the points. We expected to get P2, but we got P1. Even Ross [Wylie] struggled, we didn’t have any brake pads, so we had to run them from wherever the last round was last year. We didn’t have any wets either, so we just banged on some old ones. Today the Gods were shining down on us, whichever Gods we worship, they were shining down on us."

“So at the beginning, we tried with the dries, but we knew it would be difficult at first to stay on track while it was still damp. Our team manager showed us at the end of the stint that John had got us up into P1, and from then it was quite easy to to hold that gap and not take too many risks which is why I let the McLarens go. It was fantastic to win this weekend, and to be a part of the championship.”

"It was a great day. The car was handling very well, we’ve done a lot of work on the aero over the winter so it was great to turn it into lap time and get some great results and two Group wins."