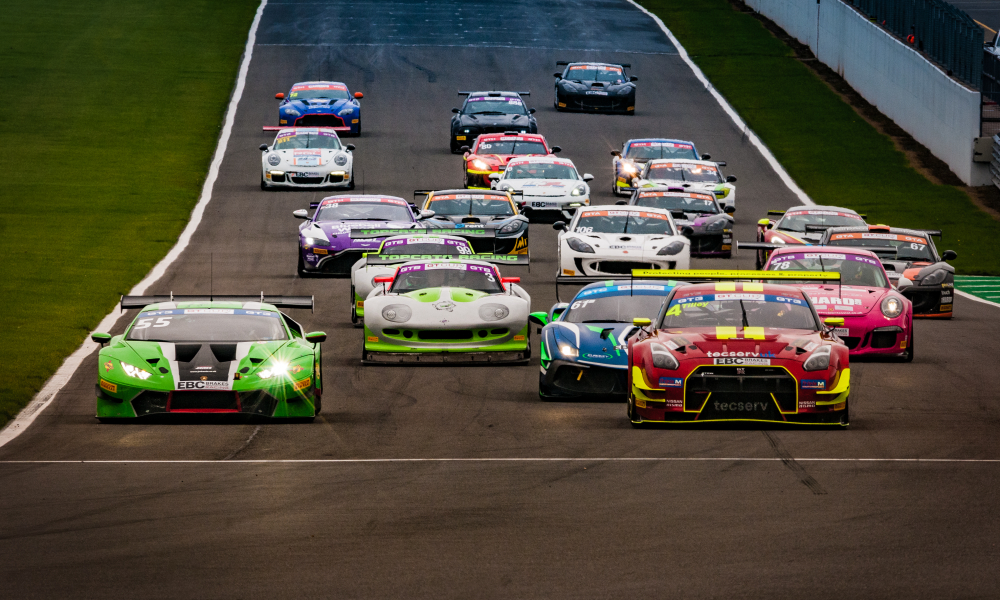 JMH Automotive and Triple M Motorsport were victorious on the opening day of the GT Cup’s 100th meeting at Donington Park, while the overall championship battle goes down to the wire between Team HARD’s Porsche and Ginetta entries.

Titles were provisionally sealed on the opening day of the final meeting however in several classes, John Seale claiming the GT3 title with a dramatic victory in a sodden second race at the national layout of the Leicester circuit with the help of a charging Marcus Clutton in his Lamborghini Huracan. Grahame Tilley was victorious in the Sprint race ahead of GTC title winner John Dhillon, who also clinched the Sprint Challenge crown (both provisionally).

A brace of stunning GTA wins went the way of the Ginetta of Henry Dawes, beating the Team HARD entry whose team-mate Sam Randon - sharing with Ben Clayden later in the day - did a GTB double in their Porsche 997. The GTH title went the way of John Whitehouse and Steve Ruston in the championship-defending McLaren 570S, despite the class wins on the day going to Newbridge Motorsport and In2 Racing.

The 15-minute qualifying session was a tight affair initially, but the Nissan of Tilley eventually found its form and sprinted clear of a charging Dhillon to grab pole position with a time of 1m06.304s. Dhillon’s GTC Ferrari got the better of the GT3 Lamborghini of John Seale, while a fine performance came from the fourth-placed Porsche 997 of overall title contender Sam Randon who topped GTB for Team HARD.

The GTA class also went the way of Tony Gilham’s HARD outfit, this time from another title challenger, Joshua Jackson, in the team’s Ginetta G55. The GTH class welcomed back Newbridge Motorsport, who this time were untroubled on course for a pole position in their Aston Martin GT4.

The rain had threatened, but stayed away in time for the start of the opening 25-minute sprint race of the weekend. Tilley was swamped early on and dropped to fifth by Craners, Seale sweeping into the lead with a demon getaway into Redgate.

Following a safety car interruption, Seale’s lead did not last long as contact with Dhillon’s Ferrari at Redgate sent the JMH Automotive Lamborghini Huracan into a spin. Tilley chased, then swiftly assumed the lead of the race to complete his comeback. The rain arrived late on however, leading to a nervy conclusion but one that Tilley survived to win his second Sprint of the season after a Brands Hatch triumph earlier in the month.

Dhillon hung on to win GTC with second place ahead of the Porsche of GTB winner Randon, which picked up crucial points while their Team HARD team-mates failed to win GTA. That class instead went the way of Henry Dawes who shone on his first appearance of the season in a Ginetta G55, beating Jackson’s similar car. GTH spoils went to the Newbridge Aston Martin of Matt Topham who held the lead from lights-to-flag ahead of JMH Automotive’s McLaren 570S.

Torrential rain then played its part for the rest of the afternoon at Donington Park, but it cleared up just in time for the 50-minute endurance race to safely get underway.

Gearbox issues sidelined Tilley’s GT-R, leaving Seale with the opportunity to make amends from pole position ahead of Dhillon. Both battled for the lead after an initial safety car start to the race, but the pair dropped back through separate spins at the chicane and McLeans respectively to hand the lead to Randon’s Porsche ahead of a flying Dawes in the Ginetta.

Dawes chased hard and took the lead of the race after mandatory stops cycled through, Clayden jumping into the Team HARD Porsche. The Domino’s-backed Ginetta put the hammer down with a chasing Phil Quaife on his case in the Dhillon-started Scott Sport Ferrari 488 Challenge, the latter mindful of a charging Marcus Clutton in the recovering JMH Lamborghini that regained time through a second safety car appearance.

Clutton caught Dhillon and scythed inside the Ferrari at the chicane, instantly moving to the lead as the Dawes Ginetta skated wide and down to third place. Clutton and Seale could cruise home to take a second win of the season for the Lamborghini pairing in their GT3 machine, Quaife climbing to second to ensure a GTC win for himself and the provisional Sprint Challenge champion, Dhillon.

Clayden made it safely to the flag, nabbing another win for himself and Randon. GTH honours were claimed by the flying In2 Racing Porsche Cayman of Ian Loggie, while the GTA win went once again to Dawes in the Ginetta.

"I accelerated as hard as I could off the line and it took me a bit of time to recover from that, but then after John went off - which was a shame as I think we could have had a good race - I got my head down and I'm very pleased with how it turned out. I'm glad it was the last lap! It was extremely difficult, and although I've won more wet races than ones in the dry, the Ferrari is fantastic in the wet. He might have caught me if it rained a bit harder. I wasn't going to go off, and we got the job done so really pleased."

"It's been good. We've won GTC and the Sprint Championship. This morning the dry race was pretty good except for a bit of a tap with the Lamborghini, but it was a nice clean finish and an amazing feeling really - it's a shame it won't continue after the weekend! The team did a great job with the car. To be honest the season start was just a delay, but it's been feeling normal other than a bit later in the year. Onto next season and see what we can do then as well."

"I had a lot of fun out there, really good fun! The rain was just a distraction until four laps from the end when it really kicked in. It was extremely difficult, but when it's like that you try to go round thinking it's the same for everybody else. It's good and we only got the car on Friday. I race Beetles a lot but this is mega; so driveable and it doesn't do anything horrible to you."

"A great result. A good start with a tough weekend that was in store. It was quite a quiet first race. Warren got in front at the start but I soon got him back with a good old lunge early on, and from then on it was all about maintaining a gap and keeping it on the track in the greasy weather. The team were saying keep it on the road and then I ran a bit wide so it was a bit late! But we hung on and it was a big one to win and that race ended at the right time for us."

"Fantastic. We didn't expect this year to be like last year as defending champions, but it turned out pretty good. In the last couple of rounds we've been able to push hard to maximise the points and I'm chuffed to clinch the GTH title. We weren't sure we could race all the rounds and with my daughter's wedding we would have had to miss a round before the Covid-19 situation."