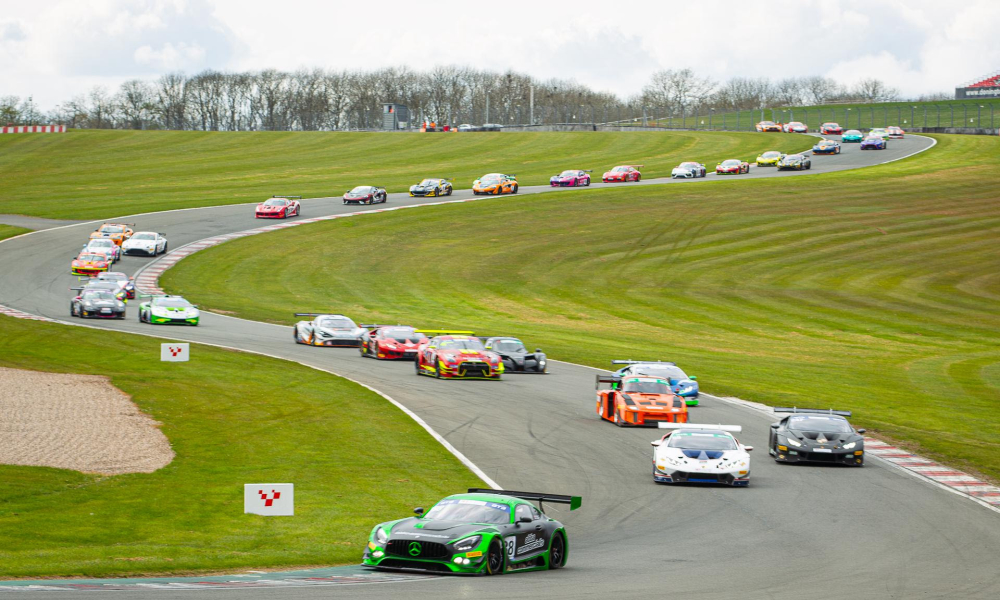 WPI Motorsport and Abba Racing shared the spoils on the opening day of the 2021 GT Cup Championship at Donington Park as a record grid graced the Leicester circuit on Saturday.

The battle between Abba and WPI started with victory for Richard Neary in the Sprint from pole, beating Michael Igoe who returned the favour in the Endurance outing - with Phil Keen supporting the Lamborghini man - by passing his Mercedes rival early on in their second GT3 dice of the day.

Sam Neary was the star of qualifying as he set the benchmark with a time of 1m04.557s in the weekend’s first 15-minute qualifying session. Beating the GTO-topping JMH Automotive Lamborghini of John Seale by 1.5s with a traffic-free lap, Neary headed GT3 for the first pole position of the season.

The sprint race was the chance for the other Neary to take centre stage. Richard Neary held off a feisty Seale heading into the first corner despite a staunch attack at Redgate, but the latter’s Lamborghini spun at Old Hairpin along with the similar car of Lucky Khera.

Neary survived a safety car interruption which wiped out his lead briefly, holding off a charging Igoe for the opening victory of the season for the Abba Racing Mercedes in GT3. Grahame Tilley charged to third in his Nissan, aided by a mechanical problem for Richard Chamberlain’s Porsche.

The GTO class went the way of RAW Motorsport’s Radical RXC, with Steve Burgess at the wheel, beating away the attentions of the Topcats Racing Lamborghini which took the GTC honours comfortably thanks to Jensen Lunn. GTH produced another fine display by the Deranged Motorsport Aston Martin of Brown from the class pole, while series returnee Craig Wilkins surged to the head of GTA in his Scott Sport Ginetta G55. Topcats celebrated a second class success thanks to Charlotte Gilbert in her Marcos Mantis.

Igoe fought back in the weekend’s first 50-minute contest however, nicking the lead off of the fast-starting Richard Neary in the early laps. Carving through backmarkers quicker in a key moment in the battle, the second of two safety car interruptions gave WPI the chance to call in their driver early, handing over to Phil Keen to extend his lead and complete a fine maiden win of the season.

A later stop affected the Nearys in their GT3 chase, giving the Balfe Motorsport duo of Lewis and Stewart Proctor’s McLaren 720 the chance to inherit second place ahead of a super showing by Seale and Abbie Eaton in the JMH Automotive Lamborghini, the latter winning GTO and fending off Will Tregurtha’s Nissan GT-R.

The Stanbridge Motorsport duo of Stuart Hall and Chris Kemp took GTC spoils in their Lamborghini Super Trofeo, while the Team Orange Racing powered by JMH outfit enjoyed a double class victory for Josh Jackson and Simon Orange in GTH and GTA in their McLaren and Ginetta machinery respectively. Team HARD’s Sam Randon and and Richard Marsh put behind them the disappointment of a race one off by dominating the GTB class in their Porsche 911 Cup.

"[Race one] was exciting, a good race. Just put my head down at the start and wanted to build a gap before hitting traffic. After the safety car it was a good restart and started battling with Michael [Igoe], in the WPI Motorsport Lamborghini for the lead. I know him from racing against him in British GT so I know I can trust him battling closely.”

"Kind of thrown in at the deep-end a bit because I didn’t do any testing and didn’t really get any clear laps in Free Practice this morning – it was all a little bit crazy out there. John did all the hard work to start off with, and then I jumped in the car and got on with it as quick as I could. It was a good battle with Will Tregurtha, he’d capitalise on my mistakes and then I’d be quicker on another part of the circuit and we’d kind of yo-yo around the lap – it was good fun! I think he was about 0.4 seconds behind for the majority of the race, he’s so much better under braking and I’m just waiting to look at the data from the car to look and see what I need to do because this is the first time I’ve driven the car round here so some learning to do and then try and do the same again tomorrow.”

"Bit of an adventure! It was fraught at the start trying to keep up with the GT3s. I’ve got more speed through the corners, but they’ve got more power on the straights. The throttle return spring broke, which is why I went off, and then after that it was a bit of a challenge to get the confidence back in it again to get back up the grid. The safety car definitely helped that though."

"It was manic! In GT racing, the first thing to do is finish. In testing you see some aggressive driving, my thought for this race was to keep it clean. Front tyres took a time to come in, but once they did the pace really picked up. The safety car cooled them down a bit again so at the restart it took a few laps to get back in. Let others cars not in our class come through, I wasn’t battling with them so I pulled over and let them through – won that race with our heads."

“I had a bit of work to do, only had time for three laps in qualifying because the rose joint in the steering so that meant I had to start from near the back. Made most of my places up on the first lap, doors were opening so managed to get through. It is such a busy grid, it was definitely hard work!”