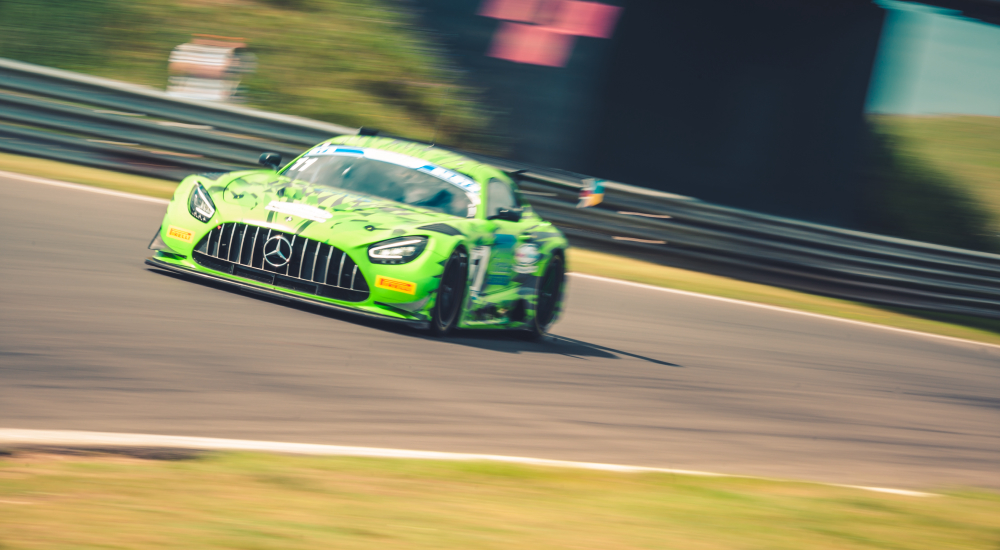 RAM Racing enjoyed a clean sweep of Sunday's GT Cup Championship action at Snetterton, as Ian Loggie added his second win of the year and Mike Price and Callum Macleod took their maiden victory in the series.

Scotsman Loggie started the day in fine form after a dominant pole position in qualifying to start the second day in Norfolk, and soon made amends for his Saturday misfortune by romping home to victory in the Sprint Race.

Loggie's RAM Racing team-mates Price and Macleod moved to the fore in the 50-minute Endurance race later in the afternoon, keeping in touch before pouncing after pitstops to give the Mercedes AMG GT3 team a double dose of delight at the 2.9-mile 300 circuit.

Racelab's Lucky Khera enjoyed a double GTC win for Ferrari, along with Raw Motorsport who did the same in GTO with their Radical RXC which spent long periods of the second contest fending off the charging GT3 cars at the head of the field in a thriller. GTH wins went the way of Paddock Motorsport and Makehappenracing in two highly competitive battles.

Sunny skies greeted the field for the second day of racing, which started with the important business of qualifying in the morning. After being left out of luck on Saturday, Loggie came to the fore with a blistering pair of laps in the opening minutes of the session to top the times, his 1m47.837s lap being the fastest of the weekend.

Behind the RAM Racing Mercedes man, Iain Campbell impressed again to put his Greystone GT McLaren 720S on the front row of the grid, with Simon Orange third. GTO honours went to the Raw Motorsport Radical RXC, while Saturday's double GTC winners Topcats Racing with HEX.com topped their group ahead of Racelab's Khera. After a strong finish to day one for Valluga Racing, the team's Porsche Cayman beat away the competition in GTH for a group pole position.

Starting from pole position, Loggie made no mistake at the rolling start by surging into a three-second lead, and the Scot would control the race from lights to flag to take victory for the second time this season - Loggie having also won the season opener at Donington.

A charging Simon Orange moved to second spot ahead of Iain Campbell with a lunge up the inside of the similar McLaren 720S but soon found himself back to third when the Raw Motorsport Radical of Steve Burgess moved past him into second. Orange held off Morgan Tillbrook and would take back the second spot very late in the race after Burgess spun at the Nelson's exit to fourth overall, the latter still recovering to clinch the GTO group victory.

The GTC battle also encountered late drama. Jensen Lunn looked on course to make it three wins from three in Norfolk until his Lamborghini Huracan spun coming through Coram Bend, handing the opportunity to Khera to sweep by and take his first group win of the weekend in the Racelab Ferrari 488 Challenge.

GTH was another entertaining dice at the head of the group, won by Makehappenracing's Chris Hart in the Mercedes AMG GT4. Hart would have to work extremely hard for his latest triumph, however, as Adam Hatfield usurped him into turn one in a three-car tussle for the win before retiring from the race in the Paddock Motorsport McLaren 570S. Hart hung on ahead of the Valluga Racing Porsche Cayman of James Wallis, while Tehmur Chohan chased the pair home for third in the second Paddock McLaren GT4.

The fastest lap ensured Loggie could also enjoy the luxury of pole position for the fourth and final race of the weekend, but he was beaten into turn one by the rapid Radical of Burgess which maintained a gritty stranglehold on the top spot.

Orange would be first to finally find his way by the flying GTO car, but the more nimble GT3 McLaren 720S was handed a stop-go penalty for a nudge on Loggie at the Agostini hairpin that dropped him out of contention. Tillbrook gave chase and made his way by into the race lead, while Loggie recovered from his earlier moment to find his way past the Radical just before pitstops started, after Burgess ran slightly wide exiting Williams Bend.

The success penalties applied to pitstop times gave the order a shake-up. Tillbrook handed over to Clutton who slotted back into fourth place with their longer stationary time in the pits, while the impressive Steve Ruston handed over the Paddock Motorsport McLaren 720S to John Whitehouse in the overall race lead, ahead of Callum Macleod's RAM Racing Mercedes which was initially driven by Mike Price.

Macleod pressured his rival and eventually swept around the outside under braking for Riches to assume the race lead, Paddock Motorsport shuffled to third by Clutton at Agostini - the latter having passed Loggie prior to that - before being cruelly denied by a penalty for a pitlane speeding infringement.

It meant a superb first win of the season for RAM Racing's duo of Price and Macleod, finishing five seconds clear of Enduro Motorsport's Clutton and Tillbrook, with Loggie third ahead of the recovering Orange and Michael O'Brien. GTC went the way of Khera and David McDonald in the Racelab Ferrari, ahead of Roy Millington and Benny Simonsen's Ferrari for Millington Motorsport by FF Corse which rounded the Topcats Racing with HEX.com Lamborghini on the final lap before Coram.

GTO went to the Raw Motorsport team once more to keep their title charge in full swing, while Paddock Motorsport could instead celebrate a victory in GTH as their duo of Tehmur Chohan and Mo Ritson grabbed the win. The 570s pair made their move stick in the second half of the race, after Wallis had driven clear in the opening stint in the Valluga Racing Porsche. Hatfield and Kavi Jundu had taken the flag first in the sister Paddock Motorsport 570S, but were excluded for a technical infringement.

"I had a good start, which is the key thing - get away clean. Then I built a fastest lap for the Pitstop race which got pole which was a real added bonus, because if you don’t get that and you're fourth or fifth, it can make the race a lot harder."

"Solid first stint, I had a job to do and I started on used tyres to give Callum the boost because we thought it was going to be a lot tighter than that in the second half. Getting the pitstop right gives you a chance. Just managed to keep up on the pace. The pace was probably a bit off where it could have been because there was a bit of jostling with the Radical, but from the moment we brought it in and got it out on time, I think Callum was going to do his job."

“It was a great day, after yesterday’s issues today we found a lot of pace in the car. We got P3 in the Sprint race which was good and then for the Pitstop race it was pretty much straightforward. I did my job, tried to keep up with the Greystone GT car in front and got the pitstop right - we got it done fairly quickly. Then Moh did a great job in his stint. Everyone in GTH is really close this weekend, a lot closer than usual, the top five or six have been really close all the time so it’s made for some good racing.”

“It was a win we had to work for out there! I think the BoP is just right now, some of the cars are faster on the straights and we seem to have more in the brakes and the slow corners so its certainly making it interesting! The young lads are making me work for it again - I’m getting too old for this I think!”

"It was a good race, Lucky had a lot of pressure at the beginning from the Lambo behind but he handled it no problem. They jumped us at the pitstops unfortunately so it was a bit of hard work in the first few laps but then once I got past it was an easy race and got quite a nice gap. Today went a lot better than yesterday, we had a couple of issues so we didn’t get a couple of results when we could have got some good ones, but made up for it today so that’s the main thing! "