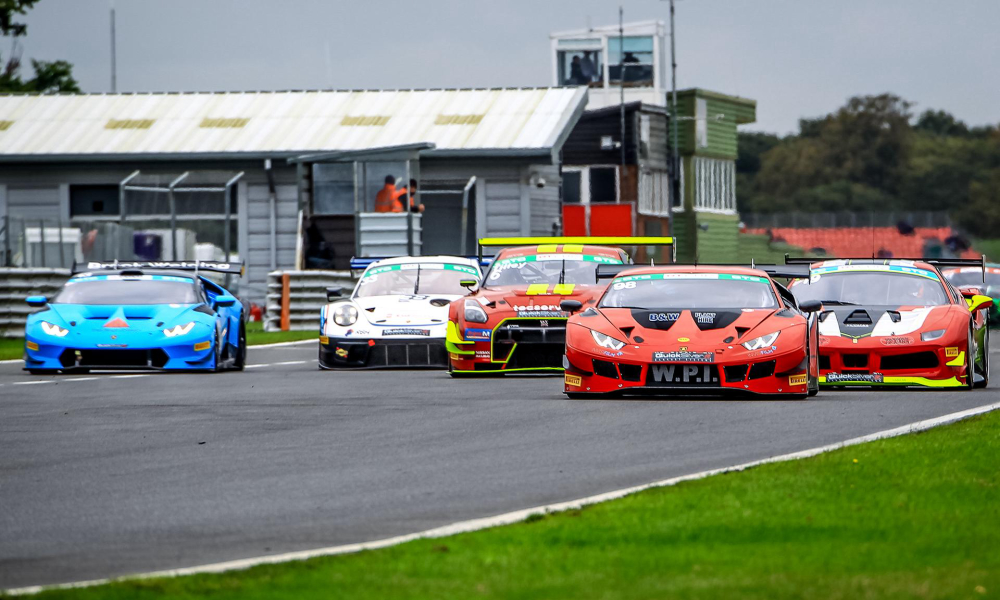 WPI Motorsport returned to the GT Cup Championship in style with a double victory in mixed conditions on day one of the final weekend of the season at Snetterton. Michael Igoe grabbed a lights-to-flag sprint race win, before sharing endurance spoils with former single seater racer Franck Perera.

Both held double GTC winners FF Corse at bay in each race, while there were also double triumphs in GTH for Fox Motorsport and for PT Sportscars in GTA in their respective Mercedes and Ginetta machinery.

GTB enjoyed one of the tightest battles of the day, with Jonathan Wright adding an endurance race victory to the 24/7 Motorsport team’s name, while sprint honours went to Saxon Motorsport after a feisty race-long scrap with Top Cats Racing.

The returning WPI Motorsport Lamborghini Huracan was quickest out of the blocks, topping the times in the first 15-minute qualifying session of the weekend with Igoe behind the wheel of the GTO car. 1.2s adrift was Donington overall winner Dan de Zille in the GTC Ferrari 488 Challenge, splitting the GTO rivals. GTH went the way of the Fox Motorsport Mercedes of Mark Murfitt, beating the rapid GTB Marcos Mantis of Jensen Lunn. GTA was topped by a new entrant to GT Cup as PT Sportscars brought a Ginetta G55 to Norfolk for the weekend, driven by Ian Payne and David Bearman.

Igoe converted pole position into his second victory of the season in the weekend’s opening 25-minute sprint race. Despite pressure from the FF Corse Ferrari of Dan de Zille early on, Igoe found pace in the Huracan to extend his lead cushion and secure GTO and overall honours for WPI by 9.9s.

De Zille hung on to claim GTC ahead of the championship-chasing Lamborghini Huracan Super Trofeo of James Webb, which usurped Graham Tilley's GTO Nissan GT-R in the second half of the race.

The GTB squabble was a tense one between the Marcos Mantis of Warren Gilbert and Saxon Motorsport’s Jamie Morrow, the latter clawing up lost ground in the BMW to catch and pass Gilbert’s Top Cats Racing Marcos in the final minutes. GTH spoils went to the returning Fox Motorsport, Murfitt’s Mercedes breaking clear of JMH Automotive’s McLaren 570 on its way to victory. GTA went to PT Sportscars and their Ginetta, with Bearman behind the wheel.

With a double in his sights, Igoe made a blistering start as the weather began to deteriorate, taking a seven-second lead by the end of the first lap from the charging Porsche of Shamus Jennings. As the heavens opened during the mandatory pit stops, Igoe handed the GTO Huracan over to former single seater star Franck Perera, and the Frenchman brought it home for a second WPI win of the day.

In GTC, a charging Dan de Zille used a late safety car to his advantage in the worst of the conditions to snatch the class win and second overall with father Graham, beating title contender Webb who now sits 21 points from the championship lead.

Series leaders JMH Automotive had to settle for third in GTH in their McLaren 570, the class won by Fox Motorsport’s Murfitt and Michael Broadhurst. GTA once again went to Bearman’s Ginetta, sharing with Ian Payne for a fine seventh place finish overall. GTB honours went to 24/7 Motorsport’s Porsche in the hands of Jonathan Wright, subbing for regular driver David Frankland.

Championship standings heading into the final day are as follows:

“It’s been a while since we were here in GT Cup and it’s been great to come back and take two wins from it. Fair play to Dan de Zille as the Ferrari was very quick on the straights so he could put a bit of pressure on at the beginning, but when the tyre temperature came in we could get our head down and pull away. Conditions started greasy in race two and then we changed to full wets, but we had a great lead at the start so Franck could bring it home. The team have done a great job.”

“It’s been wet and cold, but it’s been good. We started to work together this year, so this is like a training weekend for us. It’s been going well and Michael has done a great job today. Tomorrow we’ll hope for more in better weather conditions.”

“It was good, and nice to take the wins. I was pressuring the Igoe car at the start of race one and thought I might have had the chance to have a go at him, but then he got up to speed, got the temperatures up and I thought I’d save it for the afternoon and take a good result. I think on Sunday we’ll be better. In race two, it was a bit of a leap into the dark, but it was good out of the box and we navigated it pretty well.”

“Not a bad day. It wasn’t all my doing as Ian went and put the Ginetta on pole, which was actually a concern because I’ve not raced for the last five years! I was a bit rusty, but hung onto it and brought it home in race one. There were quite a few higher class cars out there to battle with for us, they were gaining on me down the straight but I was taking it out of them in the infield. I feel we’ve punched above our weight today.”

“A very good start and we’re really happy with that. We thought the rain would come and it finally came, but the car was good and had a decent set-up, so it was all about keeping it on the track and letting Michael do the hard bit later on. In race one I settled into a pace and kept at it. The weather changed at the end, but we got it home and it’s good to be back with wins already.”

“We were saying earlier that I’ve not raced here on this layout before, so it took me a while to get my head around it. By the time it started to rain, I pulled them back in and got past the Marcos. It’s been good having a great mix of cars to compete with, and it’s interesting seeing the different strengths of different people and their cars. I think we can lap at a good pace and the car is pretty stable throughout.”