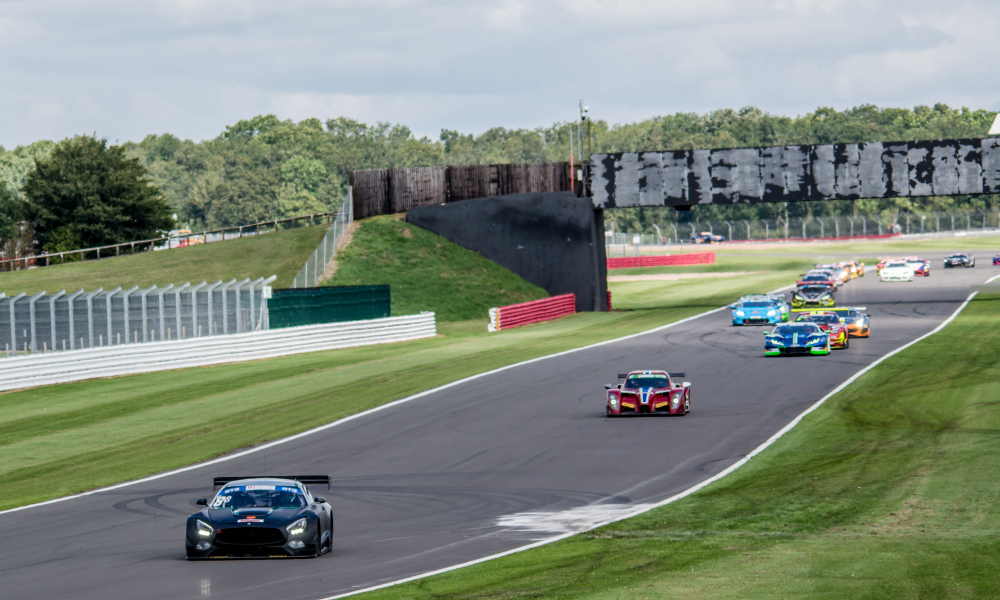 Double delight for the Nearys with Silverstone Sunday clean sweep

The Nearys made it three overall wins out of four at Silverstone as the Team Abba pair dominated Sunday's running, extending their championship lead over Topcats Racing.

The Mercedes GT3 duo comprehensively swept the day, taking pole on the final lap of qualifying before dominating the Sprint and Pitstop races by more than 10 seconds in each.

Their title rivals, Topcats Racing, kept on the coat tails of the father-and-son duo with Jensen Lunn and Warren Gilbert sharing GTC victories with a returning Tom Webb.

Josh Jackson prevailed in the Sprint Race for Orange Racing/JMH, ahead of James Guess in the Feathers Motorsport Aston Martin, but Feathers fought back to ensure GTH wins were shared after Darren Turner bested Michael O'Brien in the Pitstop race.

Nick Phelps took both victories in his group GTB Porsche 911 to take the lead in the class, with Steve Burgess and Ben Dimmack also doing the double in their GTO Raw Motorsport Radical RXC.

After ending Saturday on his roof, Simon Orange came back to win the Pitstop race using the GTA Ginetta of team-mates Russ Lindsay and Patrick Collins - the pair giving their car to Simon for the day. Makehappenracing took the honours in the Sprint encounter.

A cat-and-mouse qualifying session went the way of Richard Neary, but it wasn't made easy for the Mercedes racer as the Radical set the early pace.

Richard took chunks out of Steve Burgess' advantage, but was lying second until the last lap of the session when he finally prevailed - snatching pole away by 0.155 seconds.

Burgess maintained GTO-class pole, while Tom Webb marked his return to GT Cup with GTC pole in his Lamborghini Huracan.

After the original start was red flagged because of opening lap incidents, Sam Neary mastered the restart to secure a comfortable victory for Team Abba, more than 20 seconds ahead of the GTO-winning Radical of Burgess.

John Dhillon took second in GT3 and third overall, having had to change a tyre on his Scott Sport-prepared Lamborghini on the grid ahead of the restart after picking up a puncture at Copse.

Having fended off early pressure from Warren Gilbert in the Topcats Huracan, Tom Webb secured GTC honours on his return to GT Cup having benefitted from a spin for Gilbert to convert his class pole to victory. The latter eventually recovered to second in class.

GTB went the way of Nick Phelps who added to his growing collection of silverware with a comfortable win in his Valluga Racing Porsche, while Josh Jackson took GTH victory in his Orange Racing McLaren 570S as he pulled clear of a squabbling James Guess and Tom Rawlings - the pair finishing second and third respectively.

Makehappenracing was a clear winner in GTA, finishing 15 seconds ahead of Simon Orange - who finished second in his loaned Ginetta G55.

After the first lap action of race one, the Pitstop race proved calmer but no less thrilling as Richard Neary and Burgess squabbled for the lead going through the first sequence of bends with the Radical leading for a time heading onto the Hangar Straight.

That didn't last for long, though, as Neary quickly battled his way back into the lead and set about extending his advantage in the three-pointed star.

Handing over to Sam, success penalties cut down their advantge slightly with their biggest threat coming from the Scott Sport Lamborghini of Phil Keen - partnering John Dhillon for today - who cut down the Mercedes' advantage for a time, but couldn't close in enough to trouble the Nearys' victory.

Burgess and Dimmack completed their strong Sunday with class victory, a potential battle with Paul Bailey's Brabham denied after a suspected oil pressure issue cut Bailey's charge short having got up to sixth from a pitlane start.

Topcats took the top honours in GTC, Jensen Lunn snatching the lead from Tom Webb after a thrilling battle early on before Warren Gilbert steered the Huracan home. Despite a track limits penalty, they finished just ahead of Roy Millington and Benny Simonsen's FF Corse Ferrari Challenge.

Nick Phelps didn't put a foot wrong as he completed his clean sweep of GTB, the Porsche racer claiming pole, both wins and both fastest laps in class in a dominant day for the first-year racer.

Feathers Motorsport won in GTH in a race-long battle with Orange Racing. Darren Turner emerged from the pits with a slight deficit to Michael O'Brien and shadowed the McLaren driver for a time, before using GT3 traffic to his advantage to power into the lead. Simon Orange put his upside down Saturday experience behind him to breeze to the GTA win.

“It’s been a trying morning I guess, I only got one lap in quali before I got collected. Thankfully, it was a good one! Don’t know how I hooked it up so early but I was pretty pleased with the lap, I was hoping to build on it but got hit quite hard. It was a strange one, real mixed luck might be the best way to describe my morning. We got hit hard, but the damage was relatively easy to fix, then had a puncture on the way to the grid for the restart so again not ideal luck because we had to use an old tyre but we were able to change it. So it’s like bad luck but not the end of the world, we’re having a better time than a lot of people this weekend.”

“It’s been really good, I’m very happy. We had four class wins this weekend, three overall, wanted the four overall but can’t really complain! Obviously it’s a brand-new chassis but the car’s run flawlessly all weekend so I’m really happy and can’t thank the team enough. The rebuild has been a long two weeks, long nights, but it’s all paid off here and we’re leading the championship a little bit more.”

“Russ and Patrick have been brilliant, fantastic team-mates. There was an ulterior motive, we’re leading the teams’ championship and I’m leading the GTA championship too so we just thought it would get more points, but it was really good of them to let me knick their car. The cars are very similar, this one handled a little bit differently, but two very good cars. In the Pitstop race I knew we had the pace, and normally we have a pitstop penalty if we won the previous race and of course as we flipped it and I was on my roof we had no success seconds so as long as nothing disastrous happened we knew it would be a comfortable win.”

“After a very disappointing day on Saturday, it was a very good day today. Came back, got the head cleared, closed eyes for turn one because that’s where you need to hide from it all, then opened them and we were clear and we had two good races. For me personally, I’m pleased that in race one I had my first pole, fastest lap and win and I repeated it again in the Endurance race. Absolutely fantastic day, it’s been really good. I’m disappointed that Sam and Richard weren’t here to battle with, that would have changed the dynamic a bit I’m sure, but I felt strong and I think it would have been a close race. I think the GTB standings are going to be very close now, which is interesting at this stage of the championship to be in this position.”

“In the Pitstop race James was really good, taking the lead at one point, and just before the pitstop window opened made a small mistake and dropped to third but was right on the tail of the guys coming into the pits. When I left the pits, I came out second behind Michael O’Brien and to be fair the first lap he broke me and I realised I was overdriving the car and just needed to calm down a little bit and let the car come back to me. It took a couple of laps just to get dialled in and only just eking into the lead a little bit, and then to be fair to Michael the traffic played the biggest part. At Club he was being lapped by a GT3 Lamborghini and that just put him off line and that was enough to sneak through. Once I was in clear air, that was enough to just make a break for it.”