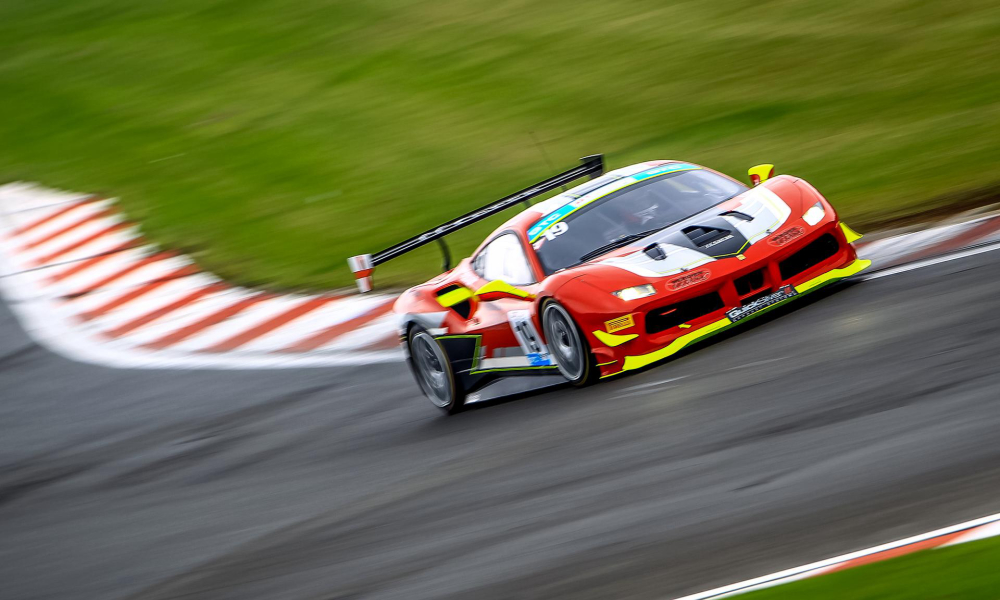 De Zille’s Ferrari 488 Challenge braved the wet conditions in Leicestershire to take a GTC pole and overall race victory in the sprint contest, before narrowly missing out a group double to Tom Webb’s Lamborghini who extended his and brother James’ overall series lead.

GTO wins went to ABG Motosport’s Jim Geddie (Lamborghini) and endurance race winners Sam Neary and Richard Neary (Mercedes), while Gareth Howell and Richard Marsh made it a clean sweep in GTA with their BMW. GTB honours went to Saxon Motorsport in both races, while GTH honours were shared between JMH Automotive and Team HARD.

Sam Neary added another pole position to his name in the 15-minute qualifying session, which was hampered by rain and oil on the circuit throughout. Neary topped the times by just over 0.3s from a battling John Seale to take overall and GTO poles, while Dan de Zille followed in the GTC-topping Ferrari 488 Challenge. GTH pole went the way of Team HARD and Simon Orange, Tom Barrow and Saxon Motorsport got the better of Top Cats Racing in GTB, while Marsh braved the conditions on dry tyres to head GTA.

Rain came back with a vengeance for the 25-minute sprint, which started and ended behind the safety car. A restart was required when the pole-sitting Mercedes of Sam Neary rotated into the gravel trap twice at Redgate and then McLeans, Seale joining the Abba car in the kitty litter.

A fine first lap from the experienced de Zille meant he not only grabbed GTC spoils, but also grabbed the overall victory ahead of the GTO -winning Lamborghini Huracan of ABG Motorsport’s Jim Geddie for FF Corse’s third overall win of the season.

The Team HARD purple patch continued, as this time Orange backed up Josh Jackson’s Saturday showing with a lights-to-flag GTH group triumph, beating the chasing Steve Ruston in the JMH Automotive McLaren 570. GTB went the way of Tom Barrow in the Saxon BMW 150 to confirm their return to winning ways after an off for Warren Gilbert, while Marsh added his third GTA win from three.

The weather improved, and so did the luck of Abba Racing as Richard Neary charged by the fast-starting Webb into the race lead by the end of lap two, having started fifth in the Mercedes GT3.

Handing the car over to Sam Neary with just over 25s in hand, the latter resisted the potential pressure of a rapid Jamie Stanley on slick tyres in the JMH Automotive Lamborghini Huracan to win Abba’s third race of the weekend by just under 30s for overall and GTO spoils.

Webb fell to third overall but later came under intense pressure from the FF Corse Ferrari of a charging Dan de Zille, who narrowly missed out in GTC in a sprint to the flag by just 0.039s.

GTH went the way of John Whitehouse and Ruston, who survived a fierce battle in their McLaren to beat Brent Millage (SPY Motorsport) and their former Ginetta in the hands of James Hillard and James Guess. Marsh and the experienced Gareth Howell were untroubled in the GTA group to confirm a clean sweep for the Geoff Steel Racing BMW GTR, making it five wins from their last five outings in GT Cup.

“We obviously started on wets in that last race and the car didn’t feel too bad. I was trying to creep away from John Seale without ruining my tyres, and then I could stay in the car waiting to see what they did. The jumped for slicks, we stayed out three more laps and I monitored their times which we felt weren’t enough to beat us. It was safer on wets, so we stayed on them.”

“I went on slicks in qualifying and it worked out as I was thinking about the last lap, then I finally got a clear lap. In the sprint race, we got into the lead at the start and Sam spinning really helped me out with that one. I can’t take all the credit as the car is just very quick now. Dad did well, and in the second pit stop race he smashed his personal best around here in the dry. It’s been about getting him some laps in and improving.”

“I left it down to the wire there in that endurance race! I think I just lost all of our tyre temperature by the end of the race, and the team were on the radio telling ‘you’ve got to go quickly’, so I was just looking for time without throwing myself off. Dan de Zille has driven fantastically this weekend, but I just managed to pip him in the end and I managed to tweak the car enough for the wet after this morning’s win.”

“We were so pleased we got through the first race and then again in the first part of the endurance race in those conditions. We got involved in a bit of contact that took a chunk out of the wheel rim and we were lucky not to come away with a puncture. I came in and handed it over to Steve who could get us to win, which we needed to keep us in the hunt for the overall championship.”

“The day has been really good for us, and we came away with a double win in the end after some good battles with the Marcos boys. Tom started on wets and then by the pit stop we felt it was probably time to change, so we put slicks on it and I managed to cope well with them to win.”