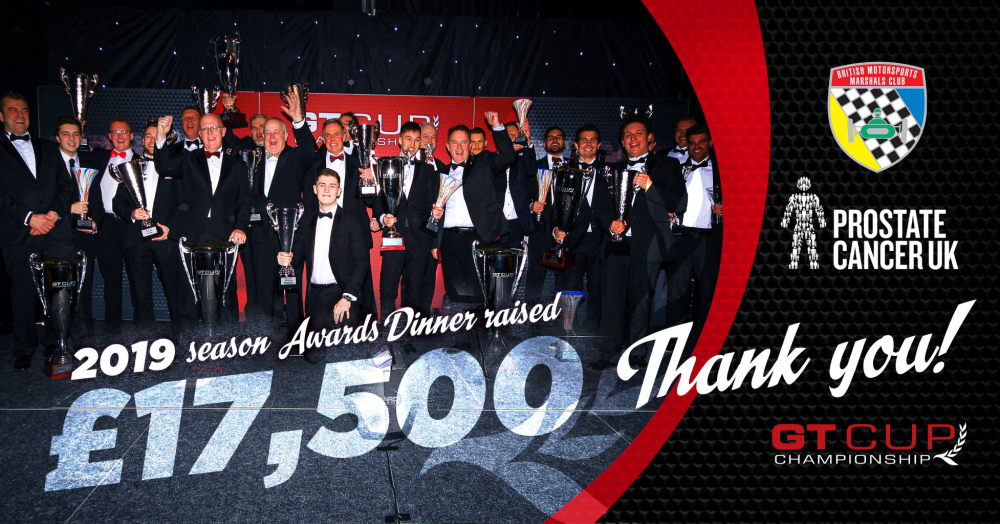 The 2019 season may have wrapped up on track back in October, but a GT Cup season wouldn’t be complete without the annual awards dinner, and this year’s event closed the season perfectly. Moving to the Apex Hotel in Bath for the first time, over 150 guests were treated to a fantastic night including a fabulous three course dinner, casino games and dancing.

Tables cleared and commentator Chris Dawes took to the stage to crown the season’s stars. The overall championship title went to Steve Ruston and John Whitehouse after a brilliant season in their group GTH McLaren. The pair have also signed for 2020, keen to defend their title. JMH Automotive, the team behind Ruston and Whitehouse, took the Team Championship Title, one of several accolades for the team – John Seale and Jamie Stanley took the group GTO title in the other JMH run car.

The answer to the question “What does it take to win Group GTB?” was consistency. David Frankland had just a single DNF to his name by the end of the season and finished all of his races in the top three, giving him a healthy points haul over his rivals despite winning fewer races. Similar things could be said for Group GTA, where championship winners Team Hard were relatively unchallenged for much of the season allowing them to earn over 250 points more than second in the group.

New for 2019 was the Sprint Challenge, a trophy awarded based on points scored only during the season’s sprint races. The challenge proved hugely popular and our inaugural winners were Tom and James Webb, giving the brothers another set of silverware to go with their Group GTC Championship trophies.

Another new award for 2019 was the Sparkies Cup. Named after GT Cup founder Marc Haynes, the Sparkie’s Cup is an annual award given to an individual or team who embodies the true spirit of the championship.  Sparkie was the Haynes’ nickname for Marc, and he was an individual who never wavered in the face of adversity, and always went racing with pride and a smile on his face. For 2019, the Sparkies Cup was awarded to James Simons of Stanbridge Motorsport. Simons, along with co-driver Fraser Smart suffered a troublesome season with a car that behaved less than perfectly. However, despite all of the trauma with the car, Simons always had a smile on his face, and thoroughly enjoyed his season in GT Cup. A worthy winner of the award.

As well as celebrating our deserving champions, the night was held to raise money for charity. A silent auction featuring money can’t buy experiences and prizes, plus a ‘safe-cracking’ challenge saw over £17,500 raised. Two thirds of the proceeds will be going to Prostate Cancer UK, with the other third going to the British Motorsport Marshals Club.