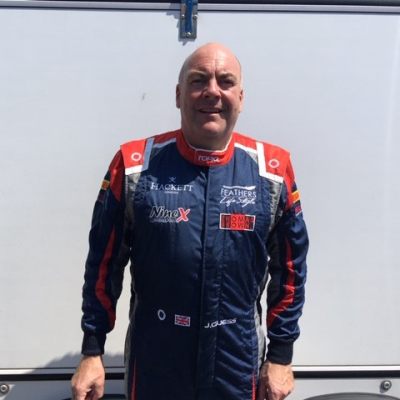 James having grown up around Racing, being family friends with Derek Bell MBE it was obvious the racing bug would infect him! So, he started Karting has been racing on and off since he was 17 years old in addition he spent 10 years managing his best friend, FIA GT World Champion and Le Mans winner Justin Bell.

In 2016 he also raced for Century in the Ginetta Supercup gaining a pole and 6 podiums out of six races.

James has also campaigned the Feathers Motorsport historic Ginetta G10 at Goodwood and various events across Europe with much success with wins, poles and fastest laps with the highlight being an overall win at the 2017 Pau Historic Grand Prix.

2019 saw Feathers moving into modern Sportscar racing with a Ginetta G55 GT4 car with much success in the AMOC GT Challenge with a pole and win in the first two races. So, a step into GT Challenge for a one-off at Donington Park last year with podium finishes has wetted the team’s appetite for a full campaign in 2020.

“I am very much looking forward to 2020 and the Challenge the GT Cup will bring and hope we can continue the success the team has had in past, and I must thank them for giving me the chance to race for such a great little team”